Footballers turn to him for a perfect pair

Footballers turn to him for a perfect pair 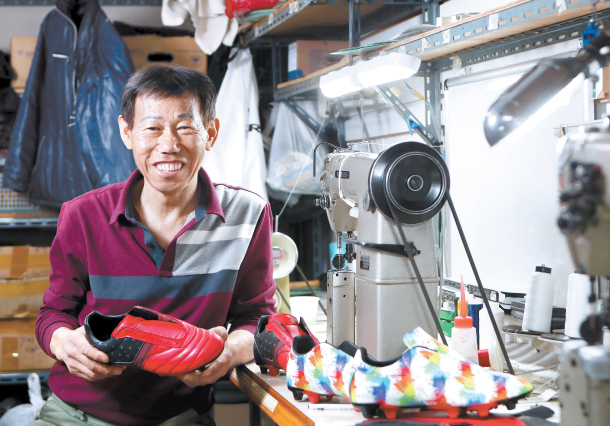 Kim Bong-hak, the last person making football boots by hand in Korea, describes the process of making the boots in his workshop in Jung District, central Seoul. [SHIN IN-SEOB]

Kim is fighting to save his trade by offering his knowledge to North Koreans and agreeing to projects that will allow others to enjoy his boots.

Kim started Shinchang Sports in 1988, and has been running it for 31 years as the owner and master craftsman. The shop manufactures and mends football boots in Jung District, central Seoul. There used to be dozens of shops around the area before Dongdaemun Stadium was demolished in 2007 to make way for the Dongdaemun Design Plaza. Only a few shops are left, including Kim’s.

Kim was born in Gwangju, Gyeonggi, to a family of eight. He left school after he graduated elementary school and worked in a shoe manufacturing factory in Daegu. He learned how to make the soles of football boots and athletic boots without being paid a penny for two years.

Through this process, Kim learned how to manufacture football boots and started creating boots with a design inspired by the traditional Chinese letter for mountain in 1993.

Kim offers customized boots that are matched to each of his customers’ needs. He even made boots for the North Korean women’s football team, which won the under-17 FIFA World Cup in 2008. 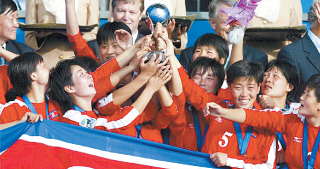 Kim received a call in 2008 from an acquaintance about making boots for a team of young women in North Korea. Kim agreed and made two pairs for each of the 20 players. The North Korean players beat the team from the United States and won the Under-17 Women’s World Cup, which was held in New Zealand.

Later, Kim was invited to Pyongyang to help create a football boot factory. During the process, North-South relations worsened, and the project was ended.

Kim still stands strong even though he is 57 years old and has kidney trouble. He said he thinks he can work for another 10 years. Yet he works alone in his shop, and his son, who was going to succeed him in the business, is ill after having two strokes.

The JoongAng Sunday sat down with Kim for an interview at his workshop in Jung District, central Seoul. 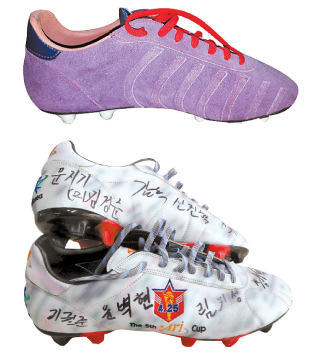 Q. You have been making football boots for over 40 years. Have you earned a lot of money?

A. This [shop] is all that I have left. I bought my older sister a 70-pyeong (2,490-square-foot) apartment when the profits were good in the early 1980s, but that was all I could do. In the mid-’80s, brands like Nike or Adidas entered [the market in Korea], so handmade football boots began to disappear. We couldn’t compete with the prices of mass-produced products and people didn’t wear football boots unless they were from a brand name. That is when I started wandering. I made boots for skating when skating was popular and I would go to provincial areas for two to three months when there was work for me there.

The process is pretty similar. I cut leather according to the design of the boot, connect the pieces with a sewing machine and attach it to a sole to create a complete product. I cut, glue, sew, embroider and backstitch by myself, whereas brands use machines and divide the labor [in producing their boots]. Since there are people [in the mass-production process] who do only one job, [handmade football boots] can’t compete with mass production in terms of products manufactured per hour. Instead, I create a handmade football boot according to the shape and design that customers want.

Who are your main customers?

People visit the [shop] hearing rumors that we make comfortable football boots that fit perfectly. People from football clubs and football players from football teams in schools come, too. Some customers who come to us are people who have a wide dorsum on top of their feet, or people with feet deformed from birth or from an accident. There is a rugby player from Yonsei University who has been a customer since he was in high school. One of his legs has been shorter than the other from birth, so one of his soles has to be higher than the other by 2.5 centimeters (0.9 inches). If people bring me a mold of their foot, I make boots according to it.

Have any famous football players worn your boots?

Kim Jae-han, a gangly goalkeeper famous in the ’70s and ’80s, was one of my regulars. Jeon Yu-sang, a 14-year-old who was a part of the under-15 youth football team and was awarded the grand prize in the Cha Bum-Kun Football Awards in 2017, would only wear football boots that I made. Lee Seul-chan, a defensive player on the Korean national football team, used to wear my handmade football boots until high school, but wore boots from Mizuno after he went pro.

You created a football boot customized for free kicks.

I keep making the boots, and there are players that only wear them. People give compliments like “its touch feels good” or “it feels like the ball is embracing my foot.” A global brand used to stick rubber on football boots. It made it easier to create a curve [when kicking the ball], but the company stopped making them, as it was easy to kick the ball in a random direction when the ball was kicked a little out of place. I use a different material [for the boot] or create bumps or put comb-patterns on it. Then the boot becomes a little heavier and the boot embraces the ball really well, so the distance of the [balls kicked wearing the boot] is shorter. Instead, if a player with a strong ankle kicks a ball [wearing the boot]; the ball curves a lot because of the increase in the rotation of the ball, and it flies strong. Players in charge of free kicks and penalty kicks prefer this football boots.

How many boots do you make in a day?

Each boot takes about four hours on average, so at most, I can make three pairs in a day and sometimes I only work on one. I do everything [that the customers] demand, from writing their initials in English on the back of the boot to adding a taegeuk mark, a red and blue symbol from the middle of the Korean flag, on the boot. That is why I sell a pair for 170,000 won ($144.70) to 180,000 won.

You must feel regret for failing to build a football boot factory in North Korea.

I thought it would be nice to work together with North Koreans. When I teach them one thing, they practice it until they can do it perfectly, even if it means they have to be up all night. It is similar to the way we used to practice until midnight or 1 a.m. to learn skills without even being paid. The women also have quick hands when they are sewing.

I’m not sure whether they are producing [the boots] by themselves. At first, we were planning to combine [South Korea’s] skills and assets and North Korea’s labor to make football boots and export them. Now, even if North Korea makes football boots, it is hard to compete [with other brands] because [the boots] do not have any branding value. Football boots from Shinchang Sports are comfortable and have great functionality, but their design is kind of poor, [which is the reason why they are struggling to compete with well-known brands].