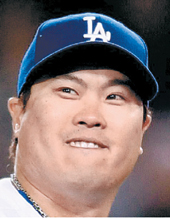 Ryu Hyun-jin of the Los Angeles Dodgers has been named the National League Player of the Week for the first time in his career.

The left-hander earned the honor Monday after throwing 17 scoreless innings with 15 strikeouts, one walk and five hits allowed over his last two starts.

He pulled off a four-hit shutout against the Atlanta Braves on Tuesday, marking his first shutout since May 28, 2013, against the Los Angeles Angels as a big league rookie.

On Sunday, he picked up his fifth win of the season after throwing eight scoreless innings against the Washington Nationals. He held the Nationals hitless until he yielded the game’s only hit in the eighth.