With Korea’s corporate regulator due to announce its annual list of conglomerates today after a two-week delay, Hanjin Group has finally determined that Chairman Cho Won-tae is its de facto chief.

“[We] received documents requested from Hanjin in order to designate a chief,” said an FTC official. “It contains information that appoints Chairman Cho Won-tae as the new chief.” 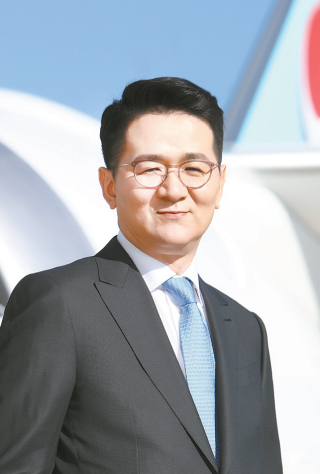 “As we have received the documents, […] the announcement on large conglomerates will be made on May 15 as scheduled,” the official added.

The FTC announces a list of conglomerates worth more than 5 trillion won ($4.27 billion) and their de facto heads at the start of May every year.

Conglomerates on the list worth more than 10 trillion won face special restrictions on issues such as cross-affiliate investment.

The antitrust agency postponed the result of its annual report on large conglomerates last week as Hanjin Group was still undecided on who holds control following the death of the late Chairman Cho.

While Cho Won-tae was quickly named the group’s new chairman on April 24, just a week after the funeral of the late chairman, he holds a relatively small stake in the group’s holding unit Hanjin Kal.

As of the end of last year, the Cho family held a 28.95 percent stake in Hanjin Kal. The late chairman held the largest stake at 17.84 percent, with Cho Won-tae at 2.34 percent. The new chairman’s sisters hold similar stakes in the company - Cho Hyun-ah at 2.31 percent and Cho Hyun-min at 2.3 percent.

Questions over Cho Won-tae’s control of the group heightened last week when Hanjin told the FTC that it did not submit the relevant documents for the regulator’s list as it was continuing internal discussions.

It is currently unclear how the inheritance process of the late chairman’s shares will proceed.

Hanjin, however, did not submit relevant documents that outright name Cho Won-tae as chief, according to an FTC official on Tuesday, fueling further speculation that control over the group remains on shaky grounds.

If the late chairman did not set out particular wishes on who was to inherit his 17.84 percent stake in the holding unit, 5.94 percent will go to his wife Lee Myung-hee and the three siblings will each receive 3.96 percent.

Should Lee receive the majority of the former chairman’s stake, she could hold a realistic hold over the group.

Even if the new chairman is appointed by the FTC as the new chief of the conglomerate, Lee’s control could be significant depending on the inheritance process.

“The management conflict at the Hanjin owner family is reportedly centered around Lee,” said a business industry source. “The three siblings have similar stakes so it is not about whether to give all the shares to one person but rather holding [similar] shares and working together whenever an issue arises.”

“In that sense, a chief was chosen. However, the three siblings’ mother will have a critical influence on Hanjin Group’s structure in the future,” the source added.

Meanwhile, the Cho family also faces a hefty inheritance tax of around 200 billion won in order to take over the late chairman’s shares.

“After the designation of the next chief, Hanjin Group will have to rush to discuss defending its management control and coming up with an inheritance tax by October,” explained another business industry source. “While they will work together to defend its control from the Korea Corporate Governance Improvement [KCGI], it is unclear whether Chairman Cho will have outright control over the entire group.”

The Cho family’s control over Hanjin Group, which includes the country’s largest air carrier Korean Air, has faced increasing pressure from other stakeholders.

Prior to the late chairman’s death, local hedge fund KCGI challenged the elder Cho’s control at Hanjin Kal after racking up a 10.81 percent stake in the company last year and becoming its second-largest shareholder.

The National Pension Service, the second-largest shareholder of Korean Air, expressed opposition against the reappointment of Cho Yang-ho as chairman at the company earlier this year.

After reports of the leadership designation, Hanjin Kal’s shares rose 12.57 percent on Tuesday.