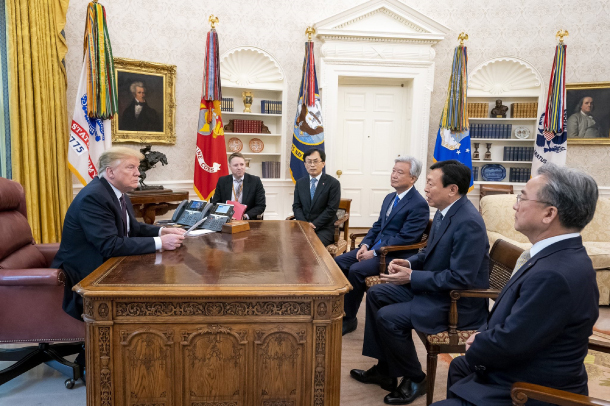 In a photo taken from a tweet by U.S. President Donald Trump, far left, Trump talks with Lotte Group Chairman Shin Dong-bin, second from right, during their meeting at the Oval Office in the White House on Monday. Trump thanked Shin for constructing a ＄3.1 billion ethylene plant in Lake Charles, Louisiana. [YONHAP]

Shin was in the United States to attend a completion ceremony for a $3.1 billion ethylene plant built by Lotte Chemicals in Lake Charles, Louisiana.

Trump welcomed Shin to his office before flying to Louisiana to promote new economic projects.

“Great to welcome Chairman Shin from Lotte Group to the WH,” Trump tweeted Monday, along with a photo of him meeting Shin and his delegates at the Oval Office.

“They just invested $3.1 BILLION into Louisiana-biggest investment in U.S. EVER from a South Korean company, & thousands more jobs for Americans.”

According to the Louisiana Economic Development, construction and operation of the plant is projected to create more than 2,500 jobs in the state.

“Great partners like [South Korea] know the U.S. economy is running stronger than ever,” Trump added in the tweet.

In a congratulatory message Thursday delivered by a White House official, Trump lauded Lotte’s plant as the single largest investment made by a Korean company in the United States during his administration. He said its completion was proof of the Korea-U.S. alliance remaining strong.

The completion ceremony for the plant last Thursday was attended by Prime Minister Lee Nak-yon, Shin and U.S. government officials.

Trump was also invited to the ceremony but could not attend. He later invited Shin to the White House.

The plant will make Lotte Chemicals the seventh-largest ethylene manufacturer in the world. Measuring 1 million square meters (247 acres), the complex consists of an ethane cracker that can produce 1 million tons of ethylene from shale gas per year, and an ethylene glycol factory with a capacity of 700,000 tons a year.

The ethane cracker is partly owned by Texas-based Westlake Chemical, which has a 12 percent stake. The rest of the cracker and the ethylene glycol plant are owned by Lotte.

Ethylene glycol is used for synthetic fibers and plastic bottles.

Lotte has been accelerating its investment in the United States in recent years. The group constructed an engineering plastics plant in Alabama in 2011, opened a duty-free business in Guam two years later and purchased the New York Palace Hotel in New York in 2015.

The latest investment was a significant step forward for Lotte following a high-profile succession battle between Shin and his older brother in 2015 and Shin’s 10-month jailing for bribing former President Park Geun-hye last year.

Shin’s absence hindered many decision-making processes for the group, and he was known to be especially interested in the conglomerate’s chemical company.