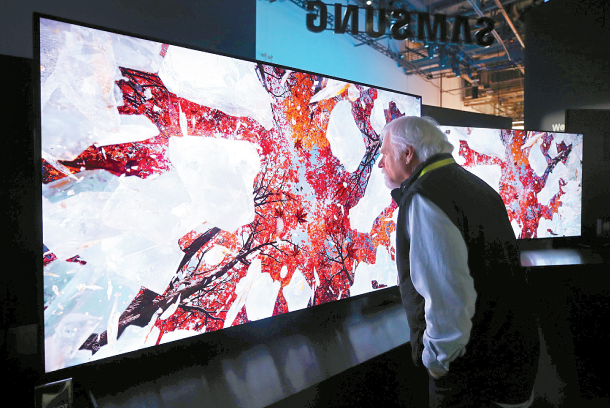 A visitor looks at Samsung’s 8K TV displayed at the Consumer Electronics Show in Nevada in January this year, where it made its debut.[YONHAP]

Samsung Electronics has slashed the price of its premium 8K television released in the United States by $30,000.

Samsung initially said it would sell its 98-inch 8K QLED television for a whopping $100,000, but cut the price by 30 percent to the slightly less whopping $70,000 just before it went on sale in the United States earlier this month. The $30,000 price drop is roughly equivalent to Korea’s gross national income per capita last year.

Samsung argues there isn’t anything strange about the change in the price, as the revision was made before the television actually hit the market, but industry insiders suspect Sony’s announcement of the price for its premium 98-inch 4K LCD television forced Samsung to revise its television price.

8K resolution means the display has an 8,000-pixel width, double that of 4K, which is currently the standard resolution in high-end televisions.

“We changed the official price of [the 98-inch 8K QLED television] before it was officially introduced in the market,” said a spokesperson for Samsung. “We put up [a higher] price on the website, but that was before it went on sale.”

Samsung denied that Sony’s price disclosure of its 2019 televisions affected its decision.

“We concluded to lower the price after the internal discussion,” said the spokesperson.

Samsung said it plans to unveil its premium television in Korea in the first half of this year, although the exact date hasn’t been confirmed. Its price in Korea will be similar to the U.S. price.

“A 98-inch is a high-end television. It’s likely the product will be sold at a similar price in other countries,” said the Samsung spokesperson.