The first section of the “Five Hundred Arhats of Changnyeongsa Temple Site: Reflection of Our Hearts” exhibit that is currently ongoing at the National Museum of Korea in central Seoul. [NATIONAL MUSEUM OF KOREA]

Visitors to the special exhibition at the National Museum of Korea in central Seoul have to walk down a spine-chilling, eerie dark path before they see anything inside the gallery. But soon enough, the path opens up and dozens of stone statues of human figures, each sitting on separate pedestals, greet them with broad smiles on their faces.

This is the beginning of the “Five Hundred Arhats of Changnyeongsa Temple Site: Reflection of Our Hearts” exhibition that kicked off at the National Museum of Korea late last month. These statuettes are known as Arhats, or luohan, in Buddhism, which refers to those who have gained enlightenment. They are one of the historical disciples of Buddha. The exhibit features 88 Arhat statues with lifelike expressions. Not all of them are smiling though, as some show expressions of anger and sorrow. 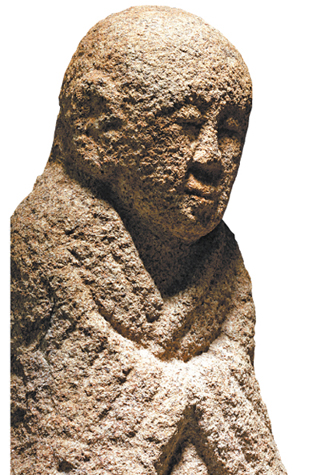 The statuettes were first discovered in May 2001 by a farmer in Yeongwol County, Gangwon, who was leveling his land. He reported the discovery to the cultural heritage authorities and the Gangwon Research Institute of Cultural Heritage spearheaded an excavation project. From the site, a total of 317 statuettes were unearthed.

Among them, 64 were in complete form while the rest were discovered with the heads separated from the bodies. The site was revealed to be the location of the Changnyeong Temple during the Goryeo Dynasty (918-1392) - a roof tile with Chinese characters for Changnyeongsa (Changnyeong Temple) was also discovered during the excavation, along with other Goryeo celadons. The temple is mentioned in the 1481 book “Dongguk Yeoji Seungnam,” or Augmented Survey of the Geography of Korea.

According to Choi, Arhats in East Asian Buddhist art appear in groups of 6, 8, 16, 100 or 500 and that the Changnyeong Temple is presumed to have held 500 Arhats.

Park Kyung-eun, who curated the exhibition, said some of the statuettes were exposed to heat, suggesting that they were created in late Goryeo or early Joseon Dynasty (1392-1910) and were destroyed during the Joseon Dynasty when Neo-Confucianism became dominant in the country.

Because these Buddhist figures were discovered in Chuncheon, they were first revealed to the public through an exhibition that kicked off last August at the Chuncheon National Museum in Gangwon. The exhibition attracted about 30,000 people to the museum and was selected as “The Exhibition of the Year” in 2018 by the National Museum of Korea. 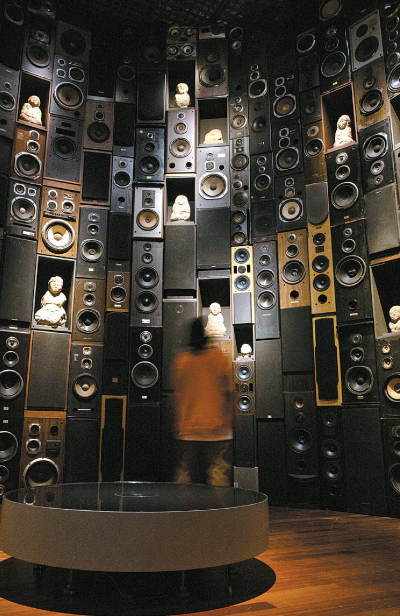 Bae Ki-dong, the director general of the National Museum of Korea explained that he wanted to bring the exhibition to Seoul so that more people can enjoy it and “receive warm energy from these Buddhist statuettes with smiles on their faces that were buried underground for over 500 years.”

The exhibit is largely divided in two sections. The first part, “The Faces of the Arhats: Between the Earthly and the Saintly” section, displays 32 Arhats each placed on pedestals erected in a dark room with a brick floor. To offer visitors a sense of walking in a forest, contemporary artist Kim Seung-young, who worked on the design of the exhibition, created pedestals reminiscent of trees and added sounds of birds chirping.

To make sure the Seoul exhibition offers something different from the exhibition in Chuncheon, Kim added a new section.

The “Arthats of Daily Introspection” section stands in contrast to the first nature section, reminding visitors of an urban environment. Kim used a total of 700 speakers to make the tower-like installation and placed 29 Arhat statues among them to create a “scene where old historical figures harmoniously meet contemporary art.”

The sounds of water dripping and bells resonate as visitors walk around the tower.

“The Arhat statuettes are from the past,” Kim said, “but the expressions on their faces are so universal, or even modern … I think this installation shows the harmony between cultural heritage and contemporary art.”