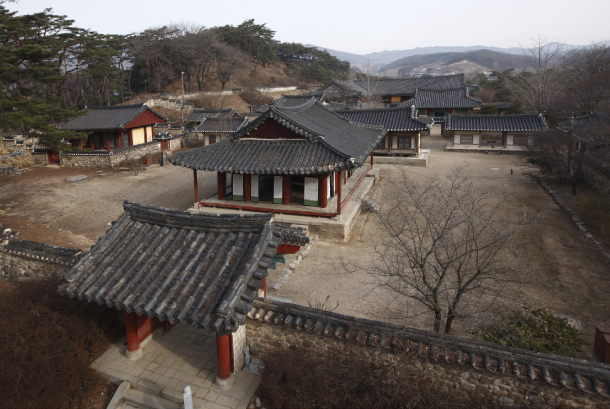 Nine seowon, or buildings used as neo-Confucian academies during Korea’s Joseon Dynasty (1392-1910), including the Sosu Seowon in Yeongju, North Gyeongsang, above, have been recommended for addition to the Unesco World Heritage List on Tuesday. [CULTURAL HERITAGE ADMINISTRATION]

A Unesco preliminary review panel recommended nine Korean seowon, buildings used as Korean neo-Confucian academies during the Joseon Dynasty (1392-1910), be added to the world’s cultural heritage list on Tuesday, according to the Cultural Heritage Administration.

It was the administration’s second attempt to get the nine seowon on Unesco’s list of world treasures.

In 2016, the administration decided to withdraw its application to include the nine Korean neo-Confucian academies on the Unesco Heritage List as the International Council on Monuments and Sites (Icomos) pointed out that there seems to be a lack of a commonality among them. At the time, Korea failed to convince the review panel exactly how Korean seowon were different from those in Japan and China.

For Korea, seowon were a type of educational facility of the Joseon Dynasty that also functioned as Confucian shrines. Youths were educated at them and they were key places for discussing social and state affairs among local aristocrats during the Joseon Dynasty.

A final decision will be made by the 43rd Unesco’s Intergovernmental Committee, which will be held from June 30 to July 10 in Baku, Azerbaijan. According to the Cultural Heritage Administration, since the Unesco World Heritage Committee usually accepts Icomos’s recommendations at the annual meeting, “unless an unexpected event occurs, the nine seowon will become Korea’s 14th world treasure.”

“We’ve been making efforts to comply with Icomos’s reviews and submitted an improved application in January 2018,” said an official from the Cultural Heritage Administration. After reviewing the revised application for one and a half years, Icomos finally acknowledged the “outstanding universal value of Seowon and the clear evidence of neo-Confucianism that was deeply rooted in Joseon Dynasty,” explained the administration.

Icomos recommended the Cultural Heritage Administration come up with comprehensive plans to preserve the nine seowon scattered across the country. The administration said it will work closely with provincial governments to implement that recommendation.

The nine seowon are perhaps the only remaining neo-Confucian academies that have been well-preserved in Korea. In the 18th century, such buildings increased in number, but most were destroyed as powerful politician Heungseon Daewongun (1820-1898), a royal regent who ruled on behalf of young King Gojong, abolished most of them as part of his reform plan.