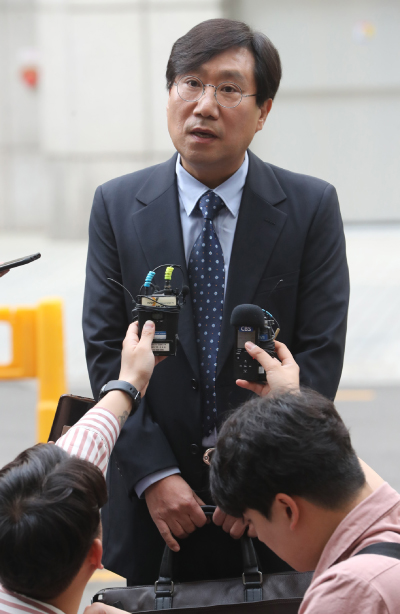 Yang Jeong-cheol, the former secretary to the president for public relations planning, talks with reporters Tuesday as he goes to work as director of the Institute for Democracy, the think tank of the ruling Democratic Party. [YONHAP]

Yang Jeong-cheol, one of the closest confidants of President Moon Jae-in, ended his two years of self-imposed political exile on Tuesday to head the ruling party’s think tank ahead of next year’s general election.

On his first day as the director of the Institute for Democracy, Yang talked to reporters in the morning on his way to the office. Yang said his mission is the Democratic Party’s (DP) victory in next year’s legislative elections.

“I earlier said I would stay away from politics for five years, but I decided to accept this job because I wanted to make a contribution, however small it will be, to the party,” Yang said.

About 30 reporters surrounded Yang, a public affairs strategist from the Roh Moo-hyun Blue House, as he headed to his new office.

When asked about his planned role, Yang said he was asked by the DP leadership to remove any friction to steer the party ahead of the general elections.

He also said his goal will be prompting internal unity.

“I don’t think we have a faction loyal to Moon and another faction that is not,” said Yang. “To win the general elections, we will work as one team.”

Yang also dismissed speculation that he will lead a massive reshuffle to support Moon allies over other politicians. Earlier this year, several aides who had worked as secretaries at the Blue House, including the chief of staff, Im Jong-seok, resigned and returned to the party.

“I think that is a groundless concern,” he said. “When you donate blood, you don’t take out all the blood in your body and receive new one. When you do that, new and old blood are mixed in your body.”

When asked whether he will run in April’s general elections, Yang made it clear that he won’t.

“I didn’t come here for my own politics. I came here to sacrifice myself to the party,” he said.

He also said it is not desirable for the party to feel uneasy about recent opinion polls in which the main opposition Liberty Korea Party has seen rapid increases in its approval rating.

“The Blue House, cabinet and the party must reflect on themselves to see if we had lost our initial determination,” Yang said. “Although our party won three presidential elections, we were rarely in favorable situations before the campaigns. You cannot calculate the direction of winds. You just have to overcome it.”

Meanwhile, the former presidential chief of staff and two other former aides to Moon visited Gwangju on Tuesday and paid their respects at the May 18th National Cemetery for the victims of the 1980 democratic uprising in the city.

On Saturday, they will visit Bongha Village in South Gyeongsang with other former presidential aides who left the Blue House earlier this year and pay respects at the grave of late President Roh.

“Although political rookies will be given extra points in the internal primaries, it is hard for them to secure supporters within a short period of time,” a key Blue House official told the JoongAng Ilbo on May 8. “They are leaving the Blue House to prepare for the general election because their support in their districts is weak.”