Park wants a beer with Moon

Park wants a beer with Moon

Seoul Mayor Park Won-soon wants to pitch his ideas about banking deregulation and administrative decentralization to President Moon Jae-in in a one-on-one beer meeting, Park told a group of reporters during his trip to Tel Aviv last week.

“In the president’s cabinet meeting, Moon would always ask me, near the end of the meeting, ‘Mayor Park, do you have something to add?’” Park said in a press conference hosted at a restaurant in Tel Aviv on May 7. “Of course, I have many things to add. But it’s near the end of the meeting and who wants to stick around to hear a bunch of ideas? It would be ideal to get one-on-one time with Moon. I wish he would suggest something like an hour of conversation over a glass of beer after work.” 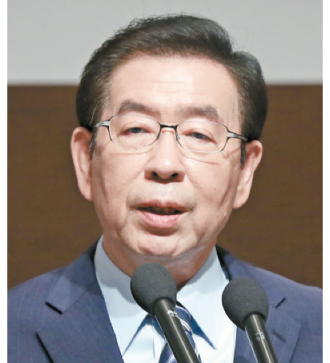 Park was in Israel from May 5 to 8 as the last stretch of his eight-day trip to the Middle East and Europe on city-to-city cooperation on the fintech and start-up industries and environmental sustainability.

In response to a reporter’s question on what he’d like to talk about in the one-on-one meeting with Moon, Park brought up administrative decentralization.

“The president once said that he will strengthen the local governments to the level of those in a federal political system,” Park said. “But not much has been done in that area. That is one thing out of many that I’d like to bring up in the meeting with Moon.”

Other ideas include banking deregulation and even building the country’s first low-cost carrier airport.

Park was in London from May 2 to 5, and met with entrepreneurs in the fintech scene in the City of London.

Developments in the start-up industry and innovation are the answers to the state of unemployment in the country, Park said in his New Year’s address. Before his recent trip, Park announced a plan to inject 1.9 trillion won ($1.6 billion) in the start-up industry by 2022, which will cover funds for education and training in artificial intelligence, blockchain and big data analytics; construction costs to build physical spaces for start-ups; and incentive programs for international start-ups to open branch offices in Seoul. In line with his initiative to open up the city for global start-ups and investments is the Hyundai Global Business Center (GBC), Park said.

Hyundai Motor Group is developing the center, which will consist of five buildings, one of which will be a skyscraper taller than the 123-floor Lotte World Tower in southern Seoul, which is currently the tallest building in Seoul.

“The GBC is a very important business, but the central government has not given it a go sign for three years,” Park told the group of reporters on the plane ride from London to Tel Aviv. “GBC is needed for Seoul to draw in the MICE [meetings, incentives, conferencing and exhibitions] industry.”

Park and the group of reporters were traveling at the time on a low-cost carrier. Making note of this, the mayor made another proposal, one that he would have to take to the president’s office if he wants it to be realized.

“We need to make a low-cost carrier airport as well,” Park said in the plane. “Seoul Air Base should be transformed for civilian use. Given that the population in Seoul and in the area surrounding Seoul is altogether around 25 million, we have too few airports - just Incheon Airport and Gimpo Airport.”

When a reporter compared Park with another potential presidential candidate, Hwang Kyo-ahn, chairman of the conservative opposition Liberty Korea Party, Park was not shy to express his discomfort.

“How could you compare me to Hwang,” Park said. “I mean, we do have similar backgrounds - we’re both graduates of Kyunggi High School and we both have backgrounds in the legal field. His research was, however, about how to make the most out of the National Security Act, while mine was about how this law infringed on human rights and how it must be repealed. … In other words, he stood by the existing power structure, while I protected the rights of the people by fighting against this power structure,” Park said.

In a survey of 1,000 people aged over 19 throughout the country by the JoongAng Ilbo earlier this month, Hwang had 19.7 percent support as a potential presidential candidate, the highest out of other potential candidates on the list, which included Prime Minister Lee Nak-yon, former Welfare Minister Rhyu Si-min and Mayor Park.