Daegu’s Jeong pulls in the crowds

Daegu’s Jeong pulls in the crowds

Daegu FC is the team to watch in the K League 1 this season. Playing at its new stadium, DGB Daegu Bank Park, the team has been averaging more than 10,000 fans per match. 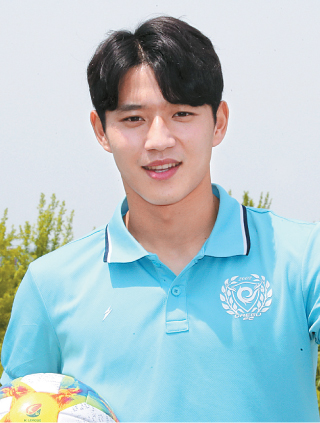 Jeong Seung-won of Daegu FC poses for a photo on April 9. [SONG BONG-GEUN]

With three popular young stars in the lineup, Daegu has seen a noticeable increase in the number of female fans heading to the stadium. Of the three, forward Jeong Seung-won is the most popular player of all.

Jeong, who made his K League debut with Daegu in 2017, finally scored his first goal of the season on April 27, against Gangwon FC.

He immediately followed by scoring again in the next match against Sangju Sangmu on May 3. Daegu won the match 1-0.

His goals in two consecutive matches are even more notable as the club won both games while missing foreign striker Cesinha. Although Jeong is a striker, he has also shown great defensive skill.

With the performance of Daegu’s young players this season, they are now ranked fourth in the K League 1 with five wins, four draws and two loses in 11 matches.

Jeong is not the tallest football player, at 1.70 meters (5 feet 7 inches) tall, but he has great speed and is very active on the pitch. When he recently trained with the Korean national football team for the men’s Olympic qualifying tournament in January, he ran about 6 kilometers (3.7 miles) to 7 kilometers in 45 minutes.

Having played football since elementary school, Jeong’s career wasn’t all plain sailing. In 10th grade, he had to take a year off because of a knee injury. After a year off, Jeong got back on the pitch and headed straight to the professional league after he graduated high school in 2016, but struggled to earn his spot in the lineup.

In his rookie season with Daegu in 2017, Jeong appeared in nine matches but didn’t score a goal. Then, in 2018, he made quite an improvement by scoring four goals and picking up three assists in 31 matches.

Throughout last year, Jeong built up his strength with weight training. This allowed him to be able to engage in physical contact with other players and not fall behind, which also allowed him to earn his spot in the starting lineup.

As Jeong is a similar height to Kante, he tries to play like him. Kante is one of the most active players on the pitch. Just like him, Jeong keeps himself active throughout a match, often being spotted all over the pitch.

Paulinho, a former Barcelona player, is Guangzhou’s most important player.

“I followed Paulinho like a shadow [throughout the match] and he got so angry that he cursed,” Jeong said. “I’ll do the same in our return match.”

During matches, Jeong also keeps the fans interested with his celebrations after he scores. Jeong imitates famous players like Antoine Griezmann of Atletico Madrid and Paulo Dybala of Juventus FC. Yet if Jeong scores against Guangzhou Evergrande FC during Daegu’s AFC Champions League last Group match on May 22, he hopes to finally do his own celebration.

As Daegu is currently ranked second in Group F, the team only needs to draw against Guangzhou to secure its spot in the knockout stage.

While Daegu still has some time before its AFC Champions League group match, the club will continue its season in the K League 1 against Incheon United at home in the DGB Arena on Sunday at 2 p.m.