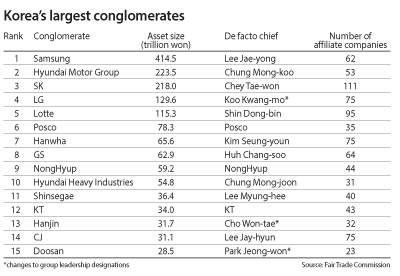 SEJONG - A new generation of chaebol leaders were designated as heads of Korea’s largest conglomerates, according to the corporate regulator’s annual list of top business groups.

The Fair Trade Commission (FTC) announced Wednesday its corporate watch list that included changes to the heads of three conglomerates - Hanjin, LG and Doosan - following the deaths of the groups’ former chiefs over the past year.

The changes mark a generational shift among the country’s top business leaders.

“A change in ownership structure [of the conglomerates] seems to be emerging, including the appearance of fourth-generation chiefs,” said Kim Sung-sam, director of the business group bureau at the FTC offices in Sejong.

A list of business groups worth more than 5 trillion won ($4.2 billion) and their de facto heads is announced by the FTC every year. The watch list is used to apply special restrictions on conglomerates providing favorable actions to the chiefs and family members.

The watch list does not include private financial groups.

Much of this year’s announcement focused on the designation of Hanjin Group’s de facto chief.

Following the death of the group’s late chairman Cho Yang-ho, the conglomerate struggled to decide who held realistic control over the group. That led to a two-week delay in the government’s announcement this year.

The FTC said it exercised its independent authority to designate Hanjin Group Chairman Cho Won-tae as head as the conglomerate did not submit documents in time that outright named Cho as the new chief.

The appointment puts to rest on concerns that the conglomerate is going through a struggle over control between major stakeholders, although the new chief holds a stake in Hanjin Group’s holding company Hanjin Kal that is roughly the same size as his two siblings.

“Cho Won-tae is the CEO [of Hanjin Kal],” said Kim. “Even if his stake is relatively low […] at the moment, he is likely to make the most important decisions, which is why we designated him.”

The debate over control will likely be cleared up in October when the inheritance process for the late chairman’s shares will be complete.

The FTC addressed concerns over the confusion on the designation process of a de facto chief.

“Groups are not all alike,” explained Kim. “It is difficult to simply decide based on shares, and what is more difficult is that influence is a very subjective concept.”

“Considering the delay, I think there is a need to consider measures to improve transparency and predictability in terms of the designation process,” Kim added.

Other than Cho, LG CEO and Chairman Koo Kwang-mo and Doosan Chairman Park Jeong-won were appointed as chiefs of their respective groups. Neither appointment was controversial.

“While Chung Mong-koo has stepped down from direct management, he is able to exert control,” explained Kim. “Chung was designated as there is a high likelihood that [the group] is influenced by him.”

The FTC said it added Aekyung and Daou Kiwoom as their assets increased, but removed Meritz Capital as it transitioned into a financial company and Hanjin Heavy Industries and Hansol as their assets fell.

Meanwhile, the number of conglomerates worth more than 10 trillion won increased with the addition of Kakao with assets of 10.6 trillion won. Those groups are subject to further regulations.