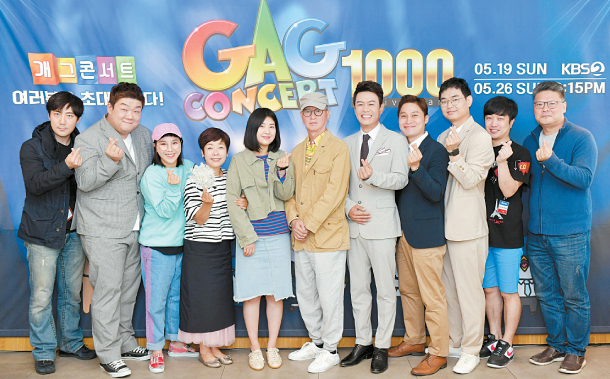 Staff and comedians from “Gag Concert” pose for a picture at Monday’s press briefing ahead of the show’s 1,000th episode on Sunday. [KBS]

For nearly two decades, public broadcaster KBS’s comedy show “Gag Concert” has been beloved by households across Korea who tune in every Sunday night to wrap up their weekend with some laughs.

The show can be best described as a mix of slapstick and prop comedy. In one popular segment, for example, comedians come on stage dressed in unbecoming overalls and slap their foreheads non-stop. Many of the skits involve the cast physically harming themselves while wearing self-deprecating costumes and make-up.

The physical humor and laughs-for-all strategy clicked with Korean audiences looking to clear their minds from work and other responsibilities. Around 900,000 people are estimated to have attended live recording sessions for the show over the last 20 years, while at its peak, the show was viewed by nearly half of all households with TV sets in the country.

So the upcoming 1,000th episode of the show should be a celebration, right?

A press briefing held on Monday ahead of the 1,000th episode this Sunday took on a rather ominous tone, with few jokes proffered by nine comedians who were present.

“We know we aren’t like before, but we are all working hard,” said producer Won Jong-jae. “The staff is frustrated and the comedians are struggling because we are not seeing concrete results.”

Won, and other members of the crew, spent most of the briefing answering questions about the steeply declining popularity of “Gag Concert” over the last few years.

From left: Comedy show “Gag Concert,” which airs on public broadcaster KBS, has produced many hit sketches in its 20-year history including “Expert,” about a man who claims to be a master at everything and proves it with slapstick humor; “We Need to Talk,” about an average family meal between parents and their teenage son; “Mabbaki,” in which comedians dressed in unbecoming overalls endlessly hit themselves on the forehead. The show also invites famous guests like actor Song Joong-ki. [KBS]

Since the show first aired on Sept. 4, 1999, viewer ratings for the program have gone from above 15 percent to around 5 percent, the average rating for the past two years.

The comedians themselves shared various theories about why their once-successful show is not what it was anymore.

Jung Myung-hoon, one of the show’s comedians, said, “There isn’t as much that [we can turn into jokes] like we did before, and many good comedians have left.”

Shin Bong-sun, who recently returned to the show to be part of the regular cast, blamed increasingly tighter regulations for limiting the subject matter that can be discussed on the show.

“I came back wondering why the show was doing so poorly these days but realized there are too many regulations now,” Shin said. “We can’t imagine performing some of the sketches that had been popular before.”

“Now is an era where we can’t call something [that is] ugly, ugly,” added Won, referencing how many of the show’s hit sketches in the past relied on mocking comedians for their appearance, something that would come off as crass and socially unacceptable today. “It’s true that producers and comedians are in a tough spot due to inevitable changes.”

In recent months, a throng of YouTubers have uploaded their thoughts about what they think is plaguing the long-running show in videos titled “Why I Don’t Watch Gag Concert Anymore,” claiming that the show relies too much on exaggerated parodies of dramas, only satirizes politicians of specific parties and is just not funny anymore. One video on the topic amassed a staggering 1.4 million views.

Whatever the reasons may be, the comedians pitched very few ideas on how to rejuvenate the show during Monday’s event.

Jung believes fresh faces and young talent can really add the necessary jolt, while veteran comedian Jeon Yu-seong, who has been with the show since the first episode, suggested that the producers need to be more selective in choosing to air skits that have been verified to make the audience laugh. Jeon, now 70, is no longer performing on the show.

“If a program is no longer funny, I think it’s right that it disappears,” Jeon added.

At the moment, there doesn’t seem to be any signs of “Gag Concert” getting canceled. But similar comedy shows on MBC and SBS have long disappeared.

TvN’s “Comedy Big League” is the only comedy show of a similar format airing today. Though the show’s viewer ratings are even lower - it had a 2.7-percent rating last week - the younger show has been a steady hit with younger audiences and has produced several superstars including Yang Se-chan and Park Na-rae.

Park Hyung-geun, another producer of the show, believes the show must go on, as a duty to the public.

“[Comedy] is important in pop culture, and if KBS gives up on the show, it would be giving up its responsibility as a public broadcaster,” Park said.

The 1,000th episode of “Gag Concert” will air on KBS2 at 9:15 p.m. on Sunday. The special broadcast is set to feature 18 different sketches, with some older hits in the mix.