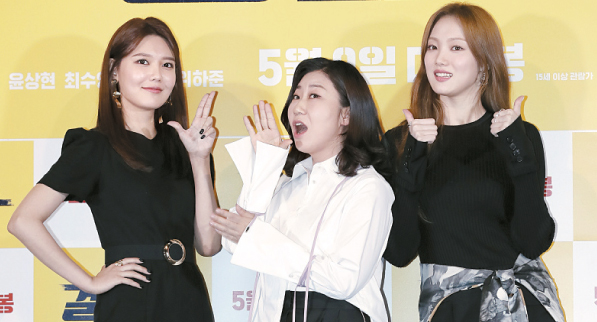 Local comedy-action film “Miss & Mrs. Cops” surpassed “Avengers: Endgame” at the local box office and climbed to the No. 1 spot on Tuesday, according to data from Korean Film Council.

The local movie beat the superhero flick just a week after its release, having sold an estimated 77,000 tickets while “Endgame” sold 70,000 tickets. The result is significant due to the large gap in the number of screens the films are being shown at. “Miss & Mrs. Cops” was shown at 942 screens while “Avengers: Endgame” was shown at 1,545 screens on Tuesday.

“Avengers: Endgame” topped the local box office for 21 days, but finally it seems that moviegoers have grown a bit tired of the film and have turned their attention to the new film, which is about two female police detectives who need to catch the perpetrators behind a leak of illegal sex videos and a drug abuse scandal in 48 hours.

The two topics, especially the former, are hot issues in contemporary Korean society.