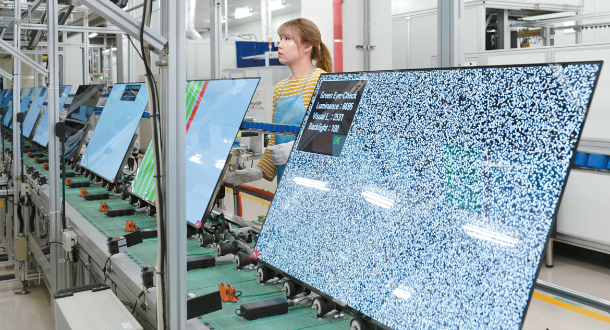 LG currently has a total of nine factories worldwide producing OLED TVs, but Gumi is still where the latest production technologies are tried out before being applied elsewhere. The company held a press tour on Tuesday inside its Gumi factory.

The 160-meter (524-foot) production line starts with a single panel, onto which components are then added. The finished TV is then checked for quality and packaged - the entire process taking no longer than 15 to 20 minutes.

The assembly line relies on close collaboration between robot arms and human staff - workers are responsible for placing components on the panels, but a robot arm is in charge of permanently fixing them together.

“Blueprints have been input into the robots so they’re all aware of which joint should go to which location - this keeps consistency,” explained Lim Byung-jin, a manager for home electronics (HE) production.

Once the assembly is finished, a scanner checks the set to see if a component was left out or attached in the wrong location. A single fault will halt the entire assembly line.

Basic quality checks are done on every set on the conveyor belt, but just one in five fully-packaged OLED TV sets are sent to separate quality assurance rooms that can accommodate around 400 65-inch monitors screens.

Neatly lined up on the floor with less than a meter separating them, the TV sets undergo more than a dozen tests for 48 hours.

“On multiple TV sets, we put on the same program and a system examines many aspects of the screen quality to check if any model has a different data set from the others,” added Cho Hyun-wook, a manager in the HE quality assurance team.

In another special room, identical tests are conducted at 40 degrees Celsius (104 degrees Fahrenheit) to make sure the TV doesn’t work differently in different environments.

Every model preparing for a new release has to undergo this test and prove it can handle the heat for an entire week.

L Short for organic light-emitting diode, OLED uses a different technology from previous TV panels in that it was the first to work without a backlight. Films inside the screen emit light on their own rather than project images relying on an external light source, which is how LCD and LED displays work.

In the high-end TV sector, LG’s OLED faces competition from Samsung’s QLED televisions. Although the two have similar names, LG executives said they are not to be confused, calling QLED an “upgraded LED screen with better colors” that works with a backlight.