Renault Samsung R&D center to have global role in group

Renault Samsung R&D center to have global role in group 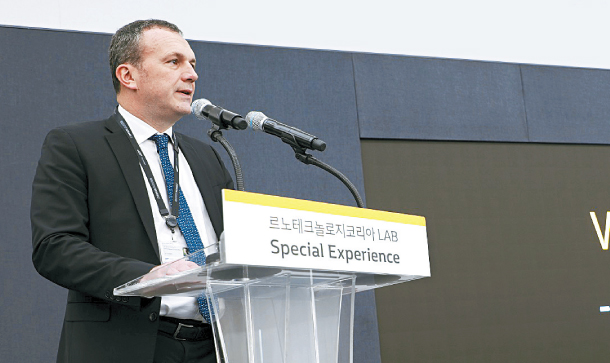 During a press event held at the Renault Technology Korea building in Yongin, Gyeonggi, Signora said the R&D center will be given more projects related to new vehicles and gadgets. He added that the center will not only work on models for the domestic market but also participate in group-wide projects.

In April, the Renault Group restructured its regional organizational chart and placed the Korean unit, along with the Japan, Australia and Association of Southeast Asian Nations (Asean) operations, under a new Africa-Middle East-India-Pacific (AMI-Pacific) region. Under the new structure, Renault Technical Center is responsible for developing and testing cars for more than 100 countries in the AMI-Pacific Region.

“Through realignment, Renault Technology Korea will play a greater role, which translates to greater possibilities,” Signora said. The technical center “will serve as a core development resource and actively push the group’s growth and future progress.”

The research center, with more than 1,000 employees, is the largest satellite R&D facility in the Renault Group. The six-story complex, built in 1996, sits on 150,000 square meters (1.6 million square feet) on the outskirts of Yongin. The Wednesday event took reporters to a design center, a vehicle crash test site and an electromagnetic compatibility measuring hub.

The automaker said Korea is the only country with both research and production facilities operated by a local unit of the Renault Group.

Renault Technology Korea “is a global institute capable of everything from designing vehicles to constructing, analyzing and testing them,” said Kwon Sang-soon, head of the research center, after taking reporters around the facility.

“Our center is conducting various projects as we are in charge of the Renault Group’s C-segment and D-segment sedans and sports utility vehicles. We are now heading projects for new vehicles targeted for the Asia region and China.”

Kwon said he and his team are in the final stage of developing the XM3 compact sports utility vehicle (SUV), scheduled to be released early next year. The center is also working on making a liquefied petroleum gas version of the QM6 SUV.

The group is considering bringing its Zoe small-sized electric vehicle for Renault Samsung Motors to release to the Korean market next year, he added.

Renault Samsung Motors previously said it will continue investment in Korea, as the local unit serves as a key R&D center for its French parent despite the long dispute with its union.

The automaker’s union has gone on 62 strikes since last October for a total of 250 hours, causing production losses of 14,320 vehicles, according to the automaker. The dispute has continued well past a March 8 deadline set for the conclusion of negotiations.

The dispute recently escalated, as the union announced Tuesday that it will stage a full-scale strike if its wage negotiations with management do not achieve progress.

The union has claimed the minimum wage is not being paid to its workers and has demanded management improve working conditions. Management has stood firm and said cost increases could harm the automaker’s competitiveness, adding that Busan factory workers are already paid better than other Renault Group employees.

Plant workers have also asked for the right to participate in personnel decision-making, which Signora refused to consider when meeting with Busan Mayor Oh Keo-don last month.

As its factory’s utilization rate has fallen by more than 20 percent, Renault Samsung Motors temporarily suspended operations of its Busan plant last month, and it is considering halting operations again later this month. The automaker said it reduced this year’s production target from 200,000 units to 160,000 units.

The union and management started meeting again this week to continue negotiations. Renault Samsung Motors officials declined to comment on the labor dispute during the press event Wednesday.