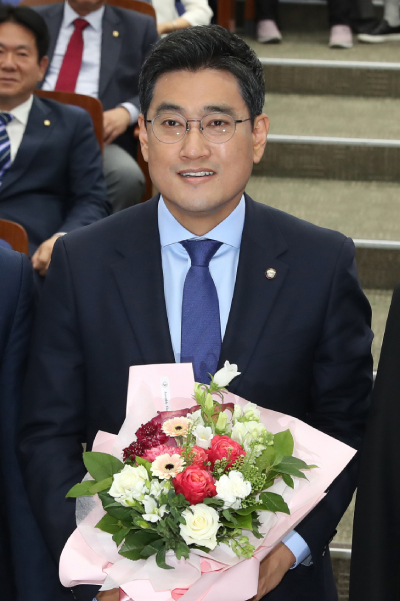 Rep. Oh Shin-hwan of the minor opposition Bareunmirae Party was elected the party’s floor leader on Wednesday at the National Assembly in Seoul. [YONHAP]

Bareunmirae Party representatives on Wednesday elected Rep. Oh Shin-hwan, an opponent of the party leadership’s coalition with the ruling party to ram through contentious reform bills, as its new floor leader.

Rep. Oh, a 48-year lawmaker representing Gwanak B District of Seoul, won a majority in the third-largest political party’s floor leader election, beating his rival, Rep. Kim Song-sik. Of the 28 lawmakers of the party, 24 participated in the vote. The party stopped the ballot count when Oh recorded his 13th vote.

During his one-year tenure as the new floor leader, Oh will act as the chief negotiator of the third largest political party and aim to resolve its internal discord ahead of the April 2020 general elections. The election was arranged after Rep. Kim Kwan-young stepped down from the floor leader post on May 8 to take responsibility for internal discord.

Kim had formed a coalition with the ruling Democratic Party (DP) and its progressive ally the Justice Party to fast-track an election law revision bill and a package of bills designed to overhaul the prosecution. This brought protests from Oh and other conservative lawmakers who defied his compromise with the ruling party. Kim replaced Oh on the judicial reform committee with a more compliant lawmaker, prompting outcry from dissenting party members.

Oh also made clear his intention to follow through with his demand that the current Bareunmirae Party chairman, Sohn Hak-kyu, resign.

“The first step toward a transformation is the change of the current leadership,” said Oh. “We don’t have the luxury of time.”

He said he will soon host a meeting of Bareunmirae lawmakers, collect their opinions and offer advice to Sohn.

Oh also held a press conference to address pending issues. Oh is an open opponent of the party’s coalition with the ruling party to fast-track bills to create a new agency to probe public servants and redistribute investigative powers between the prosecution and police.

Stressing that he is a strong backer of a plan to reform the prosecution, Oh said the current situation, particularly the opinions presented by top members of the Moon Jae-in administration - such as the justice minister, the presidential senior civil affairs secretary and the prosecutor-general - are “incredibly irresponsible.”

Oh also said it he hopes President Moon meets with the leader of the Liberty Korea Party (LKP), the largest opposition party, if the LKP unconditionally ends its boycott of the National Assembly. He then said that Moon could also have separate one-on-one meetings with leaders of other parties.

Oh is a former actor who started his political career in the Grand National Party, a predecessor of the LKP. After President Park Geun-hye was impeached in December 2016, Oh left the Saenuri Party, which later became the LKP, and joined the Bareun Party. In February last year, the Bareun Party, led by Rep. Yoo Seong-min, merged with the People’s Party, led by Ahn Cheol-soo, and Oh joined the new party.

“I have never acted as a proxy of the Bareun Party during the merger process,” said Oh, stressing his intention to promote harmony. His primary task will be uniting the party, which is split among a faction loyal to Yoo, another faction loyal to Ahn and lawmakers who represent the Honam region, compromised of Gwangju and North and South Jeolla.

Oh was backed Wednesday by the Yoo and the Ahn factions in his run for the floor leader post. His rival, Kim Song-sik, was backed by the Honam faction.

Oh’s victory fueled speculation of a possible conservative merger before next year’s general elections. Many Bareunmirae lawmakers who came from the LKP are still friendly with the main opposition party, and they often share views on contentious issues with the LKP. Rep. Yoo, leader of a faction of former Bareun Party lawmakers, has already unveiled his vision for a conservative merger.

“If the LKP proves with action that it will truly turn over a new leaf as improved conservatives, we can merge with them even today,” he said on May 2. “If not, a merger is impossible.”

Oh dismissed the possibility Wednesday by saying that he will do his best to unite the party as it is now and succeed in the general election. He also dismissed the possibility that the party will merge with the Party for Democracy and Peace. The party, which has 14 lawmakers, has strong influence over the Honam region. Political observers said the Honam lawmakers inside the Bareunmirae Party may leave to join the Party for Democracy and Peace.