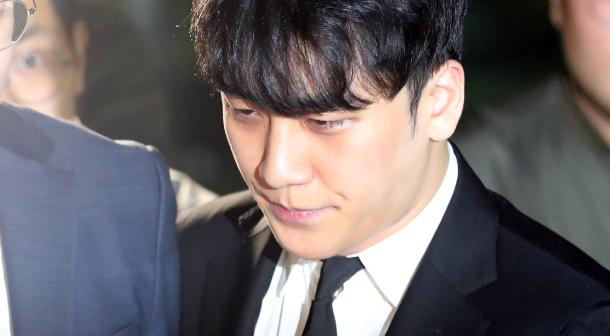 K-pop star Seungri is released from the Jungnang Police Precinct in eastern Seoul Tuesday night after the Seoul Central District Court turned down a detention warrant request for the former singer of Big Bang. [YONHAP]

Seungri, a former member of the boy band Big Bang whose real name is Lee Seung-hyun, was led into an arrest warrant hearing at the Seoul Central District court Tuesday evening tied in ropes and led out again in the same state as the court deliberated his arrest on charges of embezzlement and soliciting prostitutes. But two and a half hours later, he was released from a holding cell in eastern Seoul and went home a free man.

The court’s presiding judge, Shin Jong-yeol, ruled that neither Seungri nor his business partner Yu In-seok were liable for arrest since there was “room for dispute” about whether they siphoned off funds from their jointly-owned company, Yuri Holdings.

Seungri, who was one of the operators of the Burning Sun in southern Seoul, will face trial a free man once prosecutors formally charge him with soliciting prostitution, misappropriating funds from the club and other businesses, as well as taking and sharing a sexually explicit photograph without the subject’s consent - all of which he has denied.

Yu allegedly treated Yun to several meals, four golf outings and three concert tickets, but police said they could not prove the reception of these gifts had any connection to the information leak, since there was a time gap between the gifts and the leak.

This less-than-ideal conclusion to one of the most closely scrutinized cases this year has reportedly sapped morale among police, many of whom had hoped to detain Seungri in order to clear the agency’s name of rumors of improper conduct and collusion with major criminal suspects, as suggested in the case against Yun.

Throughout the three months of their probe into Burning Sun, police assigned a total of 152 investigators, motivated by encouragement from Korea National Police Agency Commissioner General Min Gab-ryong and even President Moon Jae-in.

In a twist of fate, one of the biggest losers in the case so far is the initial whistle-blower of the Burning Sun scandal, Kim Sang-kyo, who was recommended for indictment by police for sexually assaulting three women and obstructing the business of the club on Nov. 24 last year.

That day, Kim was engaged in a brawl at the club that led to his apprehension in Yeoksam-dong by local police, whom he later claimed had beaten him.

Kim fought back by alleging that Burning Sun was a nest of recurrent criminal activity like drug use, prostitution and sexual assault, thus opening a Pandora’s Box that threatened the careers of several celebrities and restarted rumors of collusion between law enforcement and the rich and famous of Korean society.