Lee Dae-ho of the Lotte Giants is back. 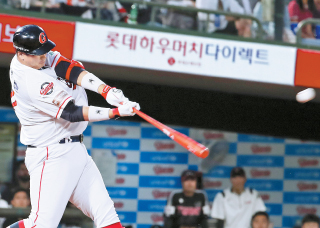 Lee Dae-ho of the Lotte Giants hits a home run during a game against the LG Twins at Sajik Baseball Stadium in Busan on Tuesday. [YONHAP]

Up until April, Lee - formerly of the Seattle Mariners and one of the most dominant KBO players of the last 20 years - was really struggling. In 30 games, he had a .279 batting average and only hit two home runs. Fans started criticizing Lee, saying that his poor performance was a sign that he was getting too old to play.

But as the season continued into May, Lee started to prove that he’s not finished yet. During a game against the LG Twins on Tuesday, Lee hit two home runs at back-to-back at bats. Then, on Wednesday, he had another multiple-hit game.

In 10 recent games, Lee has had nine multiple-hit games with a .525 batting average with five home runs and 15 RBIs. Thanks to his impressive performance in those 10 games, Lee improved his batting average to .337 and hit eight home runs, as of Thursday 6 p.m. Fans have high home-run expectations when it comes to Lee - in 2011, he became the only baseball player in the world to ever hit a home run in nine consecutive games.

Lee is also the leader in the league’s RBIs, at 44, and could go on to take the RBI title this season.

“It’s too early to say,” Lee said after the game on Tuesday. “We still have 100 more games to play. It took me more than a month to get used to the new baseball this season. Throughout my career [in the KBO], I’ve hit more than 300 home runs. But this year, I’ve had a lot of good hits just becoming a fly, right in front of the fence.”

Lee isn’t the only one struggling. This season, the number of home runs in the KBO has fallen about 30 percent. There have been arguments that the lower number of home runs is due to KBO’s new baseball, as it has a lower restitution coefficient which can affect the distance the baseball flies.

“I’ve hit balls that have had less restitution coefficient in Japan,” Lee said. “This year, the balls definitely aren’t flying as far.”

Since he wasn’t making the big hits expected of him, Lee also started to question himself.

“I shouldn’t swing against bad balls, but since I’m the fourth batter, I was getting greedy,” Lee said. “So my swing was getting bigger and I was losing my timing. I even wondered if I could make a hit by hitting a ground ball. I tried to do team batting by hitting a ground ball to the second base when we have a runner at third. I just tried to hit the ball and make a sacrifice fly.”

By doing so, Lee still managed to get 25 RBIs, despite a low batting average at the start of the season. As a solution to his struggle, Lee went back to basics.

“As I wasn’t hitting well, I tried to go back to the beginning,” Lee said. “Even in practice, I tried to push [the ball] when I hit it. I’m a bigger person, but I like to push [rather than hit]. As I stopped trying to hit home runs, I started making hits and then, I started hitting home runs. More than anything, I‘m happy that I’m hitting home runs again by pushing the ball.”

Although Lee seems to be getting back on form, the Giants are still struggling at the bottom of the KBO standing this season. The Giants’ struggle at the beginning of the season has put them on a tough path to the postseason, as only the top five teams advance. As of Thursday 6 p.m., the Giants are a good seven games behind the fifth ranked Kiwoom Heroes and the club is still missing Min Byung-hun, Carlos Asuaje and Han Dong-hui due to injuries.

Due to the injuries of the starting players earlier in the season, the Giants were forced to play with a lot of new faces this season.

“Going through regular changes in the lineup isn’t a favorable situation,” Lee said. “Our starters have to get back quickly so we can add strength [to the team] in general. As the oldest Lotte player, I feel a responsibility. Baseball can’t be played alone, but I’ll try my best to bring up the team’s standing.”

Although the Giants have seen some mistakes with a roster full of younger players, they’ve also seen some potential. Most recently on Wednesday, rookie Shin Yong-su was added to the Giants’ roster right before the game and was substituted as a pinch runner at the bottom of the seventh. Then, at the bottom of the eighth, which was his first-ever at bat in a KBO game, Shin hit a home run.

By hitting a home run, Shin became the seventh-ever player in the KBO to have hit a home run on his debut at bat.