Lee Sang-hwa tears up during her retirement ceremony at The Plaza Seoul in Jung District, central Seoul, on Thursday. [YONHAP]

“Through a tough rehabilitation, I’ve been challenging myself,” Lee said. “But my body wasn’t performing as I expected it to and I was very disappointed in myself for not being able to keep my condition at its best. So I decided to retire.” 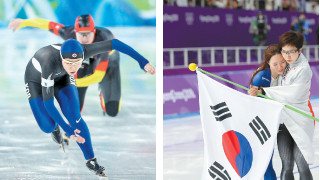 Having joined the Korean national speed skating team in middle school, Lee went on to become the most dominant skater in Korea’s long-track speed skating history.

“I clearly remember the time when I joined the national team at 15 [Korean age],” Lee said. “At the time, I set my own goal. I’ve been competing with a goal of accomplishing three things: winning the world championship, Olympic gold and setting a world record. Thanks to all the support, I was able to achieve all my goals.”

Throughout her career, Lee has competed in four straight Olympics, beginning with the 2006 Games in Turin, Italy. After winning gold at the 2010 Vancouver Games, Lee quickly became a big name in Korea and around the world as she became the first Asian female skater to win gold in the 500 meters.

The following day, Lee broke it again with a time of 36.36 seconds, which has not been broken.

Following the best season of her career, Lee competed in her third Olympics in 2014 in Sochi. As many expected, Lee successfully defended her Olympic gold, and by doing so, she quickly became one of the biggest names in the sport.

However, after the Sochi Games, Lee fell into a slump due to multiple injuries. While she underwent treatment, Japan’s Nao Kodaira quickly claimed the top spot in the 500-meter race while training in the Netherlands with coach Marianne Timmer, the two-time Dutch gold medalist.

Once Lee returned to the rink, the two were quickly positioned as rivals. But before that rivalry began, they have been longtime friends and have competed together since 2004. Although Lee failed to defend her title for a third-straight Olympics at the 2019 PyeongChang Games, finishing just short of Kodaira, the two’s friendship after the race caught a significant amount of attention.

In April, the two skaters received the Korea-Japan Friendship Award for demonstrating their friendship at the PyeongChang Olympics. The award was presented by the PyeongChang Winter Olympics Commemorative Foundation.

Throughout her career, Lee thought about retiring from the sport multiple times, especially after the 2010 Vancouver Games. But she continued for another eight years with the goal of skating in front of the home fans at PyeongChang.

Once the PyeongChang Games ended, Lee was going to retire, but postponed it for another year. Lee’s decision to continue to compete didn’t last long due to a severe knee pain. An injury to Lee’s knee required surgery for years, but she continued to compete in the fear that an operation would have meant a premature end to her career.

As Lee didn’t announce her retirement right after the PyeongChang Games, some fans expected to see her once again at the 2022 Beijing Games - if they do, it won’t be on the rink. Instead, she still hopes to continue to support the sport’s development in Korea.

“I had been thinking about retirement this year,” Lee said. “But I am disappointed that I’m retiring when speed skating is still an unpopular sport. So I think I can be an instructor for younger players. I can’t compete at the 2022 Beijing Olympics, but I want to go as a commentator or as a coach.”

Now that Lee is no longer a professional athlete, the first thing she plans to do is sleep.

“Once the PyeongChang Olympics ended, I decided to turn off my alarm, but I could only do that for two days. Starting today, I want to sleep.”