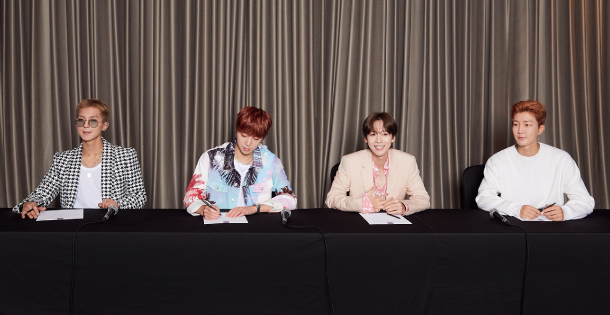 Boy band Winner meet with local press on Thursday at the Conrad Hotel in Yeouido, western Seoul, following the release of its EP “WE” on Wednesday. From left are Mino, Seungyoon. Jinu and Hoony. [YG ENTERTAINMENT]

More and more, it’s common to find successful singers who write and produce their own music. But a four-member K-pop act featuring three members who write and produce their own music is certainly a rarity. YG Entertainment’s boy band Winner has embraced its music-making talents since its debut in 2014 and has filled most of its albums with work it has created itself. Its latest EP, “WE,” is no exception.

Winner’s latest six-track EP was released on Wednesday, leading with the medium-tempo dance track “Ah Yeah.” The song has Winner’s signature upbeat vibe, but a careful listen reveals that the track is actually a cold-shouldered breakup song telling a former love that it’s time to part as quickly and as cleanly as possible. The song shot to the top of the charts on local music streaming services, as well as to the top of the iTunes chart in 19 regions around the world.

“We promised our fans that we would be busy in 2019 so that we could meet them often [with new work],” said Seungyoon during an interview on Thursday. “We’re happy that we were able to keep that promise, and we hope that we can do so again within the year. We’re really grateful that the song is No. 1. We did hope for it, but we didn’t expect it, because you never know what the situation is going to be like.”

He added, “We told ourselves not to bother with the results - though that’s a lot easier said than done. We told ourselves that we should care less about [the results] and just focus on giving our fans good music and a good performance. We’re grateful that it led to a good outcome. The fans helped us do that.”

According to Seungyoon, who wrote both the music and the lyrics for “Ah Yeah,” the song stays in line with the group’s signature tropical and cool vibe that it has become known for through its previous hits “Really Really” (2017) and “Everyday” (2018). But that doesn’t mean the band isn’t open to new possibilities.

“We get told a lot that people feel good when they listen to our music. I think that’s our signature mood. But we would like to try something new,” he said.

Mino added, “We do go with cool and tropical sounds often. But [if you look at our work], we try to cover a lot of genres. I believe that our voices are the instruments.”

Just like the band’s previous releases, “WE” is comprised of songs that the members all readily joined in making. Not only was “Ah Yeah” written and produced by Seungyoon, but Mino and Hoony also had a hand in writing the lyrics. The three also helped produce and write lyrics for three other tracks on the EP: “Zoo,” “Mola” and “Boom.”

“Ah Yeah” was conceived by Seungyoon after he watched the movie “Very Ordinary Couple” (2013), in which two people who used to date get back together, but end up breaking up again over the same thing. He came forward with the idea of “a clean breakup for a happier ending,” but the song was made richer by the other members who contributed with different ideas for the lyrics.

“I tell the rappers [Mino and Hoony] if I have a clear theme that I want to go with some songs, but with ‘Ah Yeah,’ I wanted to see how the members would come up with different [interpretations] of the idea. I think that’s what made the song more interesting. It came out differently than what I thought, but better,” said Seungyoon.

Mino explained, “I don’t think there ever can be a truly clean breakup. So I added some words that hint at it being ‘not cool.’”

Having the capability and being given the freedom to produce their own music is the very key to their success, according to Seungyoon. “Being able to lead our own work means that there are no limits to what we can express,” he said. “We do what we want to do and we say the things we want to through our songs. I think that’s how the ‘Winner’ songs - as the fans call it - are made […] Being able to make everything with our very own hands is a strong point that we have. Not only do we feel satisfied with that, the fans also cherish that.”

Hoony added that it also helped pull the group together as one.

“I think it’s really healthy that we get to talk about our work together. We talk about a lot of things when we’re together, including the direction and the message of our albums. I think it contributes to having flexible communication between the members.”

Although the band’s new music is welcomed by fans, its agency, YG Entertainment, has had a rough few months with the so-called Seungri-gate; former Big Bang member Seungri and YG Entertainment artist was revealed to have participated in sex and drug trafficking at his club in southern Seoul. But the head of the company, Yang Hyun-suk, told them “to do their own thing,” according to Seungyoon.

“We just did our part. I think that Winner has a very positive vibe, and we try to pass that along. We had our responsibilities. It wasn’t something that we could avoid, so we just tried to show [people] better work and what we could do,” Seungyoon said.

He added, “Some people say that we should quit YG [Entertainment], but we’re sure that without YG, Winner wouldn’t be here.”

It’s been six years since the group made its debut, and its just a year away from the so-called seven-year jinx - a term used in the K-pop industry referring to the time when groups start going downhill or members start to part with the group. But Winner seems more determined than ever.

“The subtitle of the album is ‘We or Never,’ because we believe that there were things that were possible because there were four of us. We wanted to emphasize the idea of us being together. I hope that everyone can feel a part of us while they listen to our music,” said Seungyoon.