SK snaps up 6.1% of Vietnam’s Vingroup

SK snaps up 6.1% of Vietnam’s Vingroup

SK Group agreed to buy a 6.1 percent stake in Vietnam’s Vingroup for $1 billion in its latest expansion into the fast growing Southeast Asia-Indochina region. 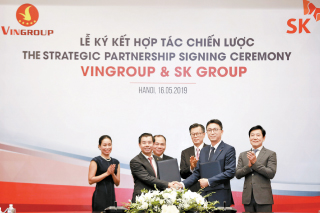 The conglomerate stressed that the deal is more of a strategic partnership than a mere investment.

“[SK Group] will actively initiate strategic mergers & acquisitions, investment in state-run companies in the process of privatization as well as funding for new businesses,” the group said in a statement.

Other potential areas of cooperation cited by SK included the establishment of high-tech infrastructure and the development of joint business models as Vietnam’s government tries to privatize many of its state-run services.

Vingroup is the top listed company by market capitalization in the country with extensive businesses in retail, real estate, electronics and resorts.

It took a year for the two parties to reach the deal after Cho Dae-sik, chairman of SK’s Supex Council, met Pham Nhat Vuong, founder and chairman of Vingroup, last May.

The Supex Council is the highest decision-making body for SK Group.

The deal is the latest SK attempt to expand its footprint in the region.

Chairman Chey Tae-won has vowed to extend the range and size of the group’s overseas investments.

Chey met with Vietnam Prime Minister Nguyen Xuan Phuc in Hanoi last year to discuss the conglomerate’s plans to invest more in both private and public companies and do its bit to ease environmental problems there.

SK has said it is looking for business opportunities in the United States, China and Southeast Asia.

The group established an investment arm in Singapore last year with investments from five of its subsidiaries including SK Telecom and SK Hynix.

When a report revealed that the five affiliates invested $100 million each in SK South East Asia Investment April, some analysts suspected that the money would go into a Vingroup investment.

But SK denied the reports at the time.