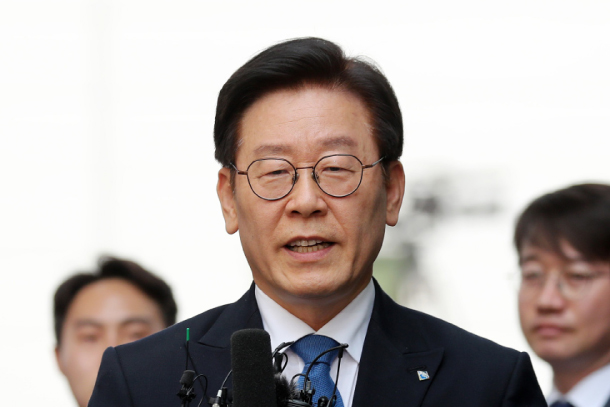 A Suwon court cleared Gyeonggi Gov. Lee Jae-myung of all charges of abuse of power and violating election laws on Thursday.

The Seongnam branch of the Suwon District Court found Lee not guilty on the four charges brought against him. Three were related to spreading false information during election campaigns and one was on abusing of his political power to commit his brother to a mental institution.

Lee, who previously served as mayor of Seongnam and was elected Gyeonggi governor in June last year, was indicted in December.

Prosecutors accused Lee of using his influence as Seongnam mayor to forcibly institutionalize his now-deceased older brother, Lee Jae-sun, seen to be a political liability, at a mental hospital in the Gyeonggi city in 2012.

Gov. Lee has also been accused of violating the national election law by making false claims leading up to the local elections last June.

This includes denying in a televised debate ahead of the local elections that he falsely impersonated a prosecutor, though he was eventually fined for this in 2004; exaggerating the profitability of a development project as Seongnam mayor in 2010; and denying that he tried to put his brother in the psychiatric institution against his will.

The prosecution had recommended 18 months in prison for abuse of power and a fine of 6 million won ($5,045) for the election law violation charges.

Lee has denied all charges.

The governor was visibly relieved as he left the Suwon court later Thursday afternoon, and was greeted by his supporters who shouted his name after he was cleared of all charges.

Lee told reporters, “I express the deepest gratitude and respect to the court that gave confirmation that the judicial branch is the last bastion of human rights and democracy.”

He went on to say, “I thank the people of this province for believing and waiting for me, and promise to bring great results to improve the lives of the people.”

The prosecution will now make a decision on whether to appeal the lower court decision.

A ruling Democratic Party spokesman, Lee Hae-sik, said through a statement Thursday that the party “respects the Suwon District Court’s not-guilty decision,” adding that Lee can now focus on various issues in the province, including the bus fare hike issue in Gyeonggi. Lee’s wife, Kim Hye-kyung, also came under fire last year for spreading misinformation over social media and was accused of using Twitter to attack Lee’s political rivals, including President Moon Jae-in, but was later cleared of defamation charges.

An actress also claimed that she had an extramarital affair with Lee, but prosecutors did not press any charges against the governor related to this.