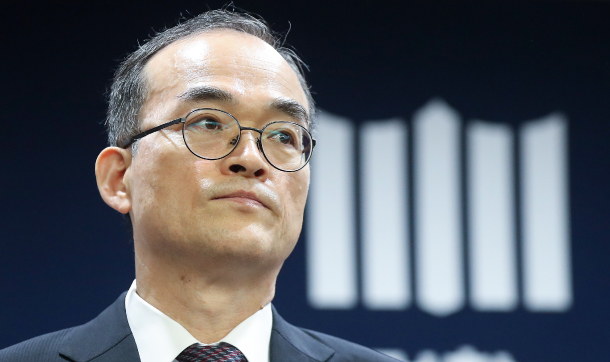 Prosecutor General Moon Moo-il promised Thursday to reform his part of the criminal justice system from within and reduce its investigative power.

“The prosecution will act first to reform itself, to reduce its direct investigative power, so that the law enforcement system abides by the democratic principles of the country,” Moon said in a press conference at the Supreme Prosecutors’ Office in southern Seoul on Thursday morning. “We are currently working on decentralizing the investigative power from within the body.”

Moon reiterated his opposition to bills recently fast-tracked by the parliament that will give prosecutors’ investigative authority to the police.

“The question is not about which body has more investigative power,” Moon said. “The prosecution already has too much investigative authority, which needs to be curbed to ensure protection of democratic rights of citizens.”

“The current bills focus on expanding the investigative rights of authorities, which should really be reduced altogether,” he continued. “I do not think it is right to allow any investigative agency to hold unchecked power.”

On April 29, the ruling Democratic Party and three allied parties rammed through bills to reform the criminal justice system, getting the endorsements of two powerful committees. The bills will reach the floor for a general vote after a maximum of 330 days being reviewed by parliamentary bodies.

If passed, the bills would empower the police to open and close cases without approval from the prosecution and establish an independent investigative unit targeting crimes by top government figures. Both prosecutors and police have criticized the bills, although the police were reportedly unsatisfied with the fact that the reforms do not go far enough.

Moon, in his press conference, proposed an idea to prevent the prosecution from being swayed by political interests. “If one prosecutor opens an investigation, then a different prosecutor must end the investigation and reach a conclusion,” Moon said. “This will ensure that the investigation remains objective and independent of influences.”

It is an idea that Moon said he picked up from France.

“When Jacques Chirac was elected president of France, I was a young prosecutor at the time, and I remember what he said in his first press conference,” Moon said. “He said that the prosecution must be politically neutral. And afterwards, France made changes so that a prosecutor who opens a case is not allowed to close it. It’s an issue that is not limited to Korea and we can try to make the same change here.”

In response to a reporter’s question about President Moon Jae-in’s recent statement suggesting that the prosecution should accept what he called “the people’s plans to reform it,” he said, “I agree that self-reform by the prosecution alone cannot do the job. But the current bills at the parliament are not going to reap the best results.

“I’m asking you to look at where the root of the problem is,” he added. “What about the current system allows prosecution investigations to be influenced by outside forces? It’s a question that I am trying to answer, too.”

While a vote on the floor for the controversial bills is guaranteed by virtue of the fast-track process, police and prosecutors are both engaging in a lobbying campaign to change the bills.

In an attempt to mediate, Justice Minister Park Sang-ki sent an email to senior prosecutors nationwide on Monday to say the government would work to ensure that concerns raised by prosecutors “are sufficiently reflected in the bill adjusting the investigative powers [between the police and prosecutors].” He listed four primary changes the Justice Ministry wants made to the bill.

These include giving prosecutors the right to launch their own direct investigations into cases independent of prior police probes if new criminal allegations are uncovered; strengthening prosecutors’ authority to supplement police investigations; allowing prosecutors to receive information on cases in which police have closed their primary investigation; and reducing the admissibility of suspect interrogation reports.

Park wrote that a variety of opinions would be considered by the government before it makes its decision on the final bill.

Moon criticized the email as an attempt to “shut up the prosecutors.”

“[The ministry] is focusing on things that need not be fixed,” Moon said. “The gist of the email was to shut up the prosecutors. I don’t think it was right for the minister to write what he wrote in that email.”

“I wanted to help young prosecutors practice in an environment free from outside political pressure and influences,” Moon said. “I am sorry that I couldn’t help bring about this environment during my tenure. You see, my 32 years in public service, they began in Gwangju…”

“Moon became a prosecutor because he pledged to work for democracy in the country ever since he participated in the May 18 uprising in Gwangju,” a prosecution official told the JoongAng Ilbo.

The uprising from May 18 to 27, 1980, which called for democracy and an end to strongman Chun Doo Hwan’s junta, was brutally crushed by the military. While the official death toll was 193, hundreds more are believed to have been killed or injured by armed soldiers.

“Moon witnessed the grave results of power abuse by public offices, and because of that, he often spoke of reforming the prosecution and limiting its investigative power,” a senior prosecutor told the paper. “He seemed concerned lately because things seem to be moving toward expanding the power of investigative agencies.”