Ham Deok-ju loses all control in difficult May

Ham Deok-ju loses all control in difficult May

Doosan Bears closer Ham Deok-ju is having a rough month. 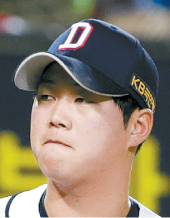 Ham, considered one of the best closers in the league, got off to a strong start this season, picking up 13 saves to be ranked second in the league. But this month has been a very different story.

Ham has a 6.75 ERA in five and one-third of an inning this month. In three of the five recent games, Ham has given up runs, and most recently during the Bears’ game against the Lions on Wednesday, he tossed four straight balls to give away a walk to Kang Min-ho. After giving up a walk to Kang, Ham quickly left the mound.

Looking further into Ham’s stats this month, he’s only had a .250 opposition batting average. Since he’s not giving away big hits, Ham’s major problem is control. Throughout five and one-third of an inning, Ham gave up seven walks.

During a game against the Kia Tigers on May 7, he gave up three walks in two-thirds of an inning.

This was the first time since a game against the Lotte Giants at Sajik Baseball Stadium in Busan on May 20 last year that Ham has given up three or more walks in a single game.

His stats for that game were especially bad as he gave up a run to the Tigers while the Bears were leading the game 3-2. The Tigers ended up winning the game.

Ham’s greatest strength has always been his change-up. Since Ham is good at deceiving opposition batters, his change-up worked well against right-handed batters as they struggled to find the right timing. But the loss of control has led Ham to a slump.

The opposition batting average against Ham’s change-up was at .182, but this month the number doubled to .429.

Ham was drafted by the Bears in 2013 and started his career as a bullpen pitcher.

Ham became the Bears’ closer last season. Before Ham, Kim Kang-ryul was the closer at the beginning of the season, but as he left the entry due a slump, Ham stepped up. At the time, Ham was a relief pitcher.

Despite an abrupt change in his position, Ham still had a solid season, picking up six wins, three losses, three holds and 27 saves with a 2.93 ERA. Of the four pitchers who picked up more than 20 saves last season, Ham was the only one to have an ERA below 3.00.

Ham also set a new record for the Bears, picking up the most saves in a single season as a left-handed pitcher. The previous record was 25, set by Lee Hyun-seung in 2016 and Yoon Seok-hwan in 1984.

But his poor performance this month leaves Ham headed in the same direction as Kim Kang-ryul. Before the Bears’ game against the Lions on Thursday, Ham was excluded from the entry.

“He is inconsistent,” Kim said. “He had the ability to close the game even when he struggled with control. I think there’s a little bit of a psychological thing going on.”

Thankfully, the Bears didn’t have to stress too much about their lack of a closer on Thursday as Yoo Hee-kwan tossed a complete game.

Throughout nine innings, Yoo gave up one run to lead the Bears to a 4-1 win, picking up his second win of the season.