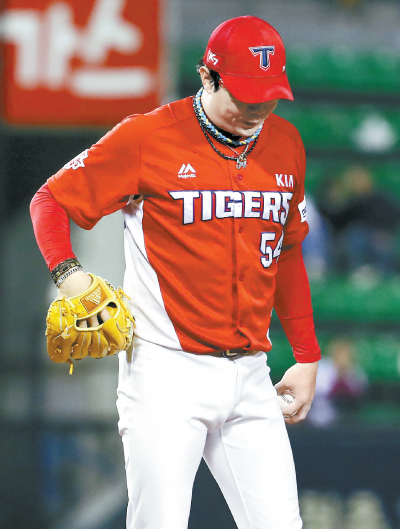 Yang Hyeon-jong of the Kia Tigers reacts during a game against the Doosan Bears at Jamsil Baseball Stadium in southern Seoul on May 8. [NEWS1]

The higher you climb, the further you fall has proven especially true for the Kia Tigers, who have plummeted to last place in the KBO just two seasons after taking the pennant and championship titles.

Star pitcher Yang Hyeon-jong, who in 2017 became the only player in Korean baseball history to win every single one of Korean baseball’s major awards in one season, has also started to struggle.

Yang, who is known as one of the most consistent players in the KBO, is on track to take home an embarrassing title this year - the most losses. Since 2014, Yang has tossed the most innings in the KBO regular season, at 933 and two-thirds of an inning. The number is even higher when including international tournaments and postseason games.

Despite the high number of innings, Yang has generally still proven consistent. He’s picked up two-digit wins in five straight seasons, and in 2017, he topped the league in wins at 20. During that year, Yang played a significant role in leading the Tigers to its 11th Korean Series title.

But things have changed this season. Yang started strong, giving up one run in six innings during the Tigers’ opening game against the LG Twins on March 23. Following that game, he’s given up more than five runs in the next two games and struggled to pick up a win.

Yang has now started in nine games and has only picked up one win and seven losses. Of the 30 starting pitchers that have fulfilled the regulated innings as of Thursday, Yang has the 28th highest ERA, at 5.36.

Due to this, his number of innings pitched per game has decreased significantly from last year, from 6.36 to 5.59. At this pace, Yang could easily have his worst season in terms of losses this season. His previous worst year was 2016, when he picked up 12 losses.

The biggest reason behind Yang’s struggle this season is his ball speed. Yang is known for his fastball, pitching as fast as 153 kilometers per hour (95 miles per hour). But so far this year, he hasn’t gotten his pitch speed anywhere near that level.

“Yang made his own training program,” said Tigers pitching coach Kang Sang-soo. “There was nothing wrong with the training log, and since he’s a veteran pitcher, I just left it up to him.”

However, once the regular season started, Yang didn’t appear to be ready as he wasn’t able to pitch anywhere near as fast as expected. During the Tigers’ game against the Samsung Lions on April 4, Yang’s average speed dropped to 139.7 kilometers per hour. His average for the season is just over 140 kilometers per hour.

Due to his slow start, a lot of fans have blamed the club for failing to properly take care of its players. As Yang pitched in so many innings in the past five years, fans argue that the club should have made more effort to let him rest.

Yang isn’t the first player to see his performance dip due to burnout.

Jang Won-jun of the Doosan Bears is another player who tossed far too many innings. Aside from the 2012 and 2013 seasons when he played for the Police Baseball Team to fulfill his military duty, Jang picked up more than 10 wins in eight consecutive seasons from 2008 to 2017.

But last year, Jang finally seemed to be worn out, picking up only three wins.

“Jang Won-jun pitched in too many [innings], so that was coming,” said Bears manager Kim Tae-hyung.

Yang isn’t entirely to blame for his rough spell. Although he definitely wasn’t ready for the start of the season, the fielders haven’t helped much either. This season, the Tigers are rated to have some of the weakest fielders in the league.

But it’s not just the defense that is weak. On days when Yang started, the batters failed to support him with runs. During the Tigers’ game against the Bears on May 8, Yang gave up only one run in the seventh inning. Despite his solid performance, Yang still had to walk away with a loss as the Tigers weren’t able to score a run throughout nine innings.

Then, against the KT Wiz on Tuesday, he gave up one run in seven innings, but as the batters once again failed to score, he picked up a loss. In the three games Yang started in during the month of May, he has a 1.35 ERA but has only picked up one win - his only one of the season.

Yang has one of the worst run support figures in the KBO, at 3.76 runs per game.

Despite Yang’s slow start and bad luck, he is not discouraged.

“I know my body condition the best,” Yang said. “I hope [people] don’t talk about me being overused. It’ll get better.”