Ladies’ Code returns with an old-school swagger: After nearly three years away, the group hopes to meet their loyal fans again

Ladies’ Code returns with an old-school swagger: After nearly three years away, the group hopes to meet their loyal fans again 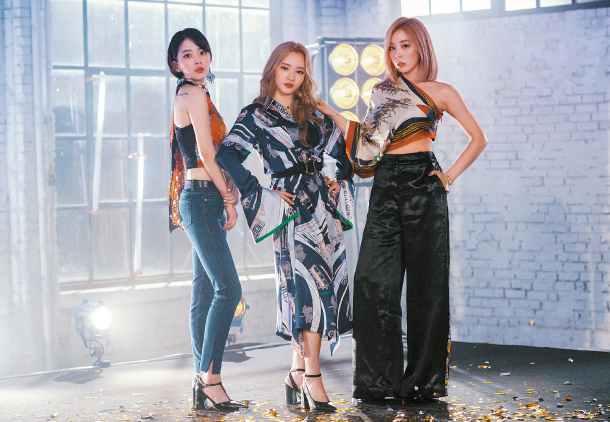 Girl group Ladies’ Code dropped the song “Feedback” on Thursday, its first release in nearly three years. Members, from left, Zuny, Sojung, and Ashley are ambitious and hope to be able to release a full-length album by the end of the year. [POLARIS ENTERTAINMENT]

After a nearly three-year hiatus, girl group Ladies’ Code returned to the K-pop scene on Thursday with their new single “Feedback.”

The song is an energetic, jazzy tune reminiscent of their previous hits “Pretty Pretty” and “So Wonderful.” The song’s music video has a retro vibe to it, showing the girls - now all in their mid- to late-20s - performing in oversized blazers and pantsuits, and looking more mature than they have in the past.

It’s no coincidence that the members appear a lot more confident.

“Out of the past six years, I had the most fun making this album,” said Sojung during an interview with fellow members Ashley and Zuny on Wednesday just ahead of the single’s release. “When we were performing ‘Pretty Pretty,’ we wanted to appear cute and pretty. But now we just want to share our energy with the audience while we enjoy the stage.”

“We’ve tried different genres, but in the end, we wanted to return with what we’re best at,” added Ashley. “A lot of the fans also wanted energetic performances, so we returned with this concept.”

While “Feedback” is a song about a girl wanting a response from her crush, there is actually a deeper meaning behind the title. The group’s future may even depend on the song’s commercial success.

Being one of the older girl groups in K-pop, Sojung expressed her concern about there being more and more younger artists to compete with.

“If we said that we didn’t feel anxious, that would be a lie. [The other girl groups] have so many good songs and choreography, and they’re young and pretty,” she admitted. “But I think I held on thinking that this is not the end of our journey.”

Ladies’ Code debuted as a five-member act in 2013 with mini album “Bad Girl.” After a fatal car crash in 2014 led to the death of two of its members, RiSe and EunB, the group went on a two-year break and continued as a trio in February 2016.

Even after two long breaks, however, Ladies’ Code’s fans, known as “Lavelys,” have been patiently waiting for the group’s return. The members expressed their gratitude, as well as surprise, for those who have continued to cheer them on.

“I wouldn’t have been able to wait that long if I were a fan,” said Sojung. “But I think Lavelys have waited for us out of loyalty, and we are preparing to return that love.”

“As much as we’ve been away for a long time, we want to meet our fans face-to-face and catch up by talking and interacting with them,” said Ashley. “We’re thinking of organizing fan meetings and other special events.”

“We’ve also had a lot of South American fans since our debut,” she added. “If we get the chance, I would really like to perform there.”

Despite the lack of official appearances as a group, the members have all been actively interacting with fans through different channels.

Ashley and Sojung each released solo albums last year, titled “Here We Are” and “Stay Here.”

The two also have their own YouTube channels. Sojung started her channel in November and she uploads covers of her favorite songs every week. Ashley, who grew up in New York, now has over 66,000 subscribers on her channel where she vlogs about her life as a K-pop idol in English. Her videos often feature family and friends, including Rose from Blackpink, whom Ashley said she became friends with several years ago after they met at church. Ashley also serves as a DJ for the English-language Arirang radio channel.

Unlike her fellow team members, Zuny has been focused on improving her acting skills ahead of her first drama series, KBS2’s “Justice.”

Set to premiere in July, the legal drama is based on a popular web novel about a lawyer who goes to dangerous lengths to avenge his family’s death.

Zuny, starring alongside more experienced actors like Choi Jin-hyuk, Son Hyun-joo and Nana, said she will play an important character who gradually loses her eyesight due to an accident.

“I actually have really good eyesight,” Zuny admitted. “So I had to practice not being able to see well by wearing glasses covered with pieces of paper that just had tiny holes cut on them.”

Coincidently, the timing of filming for the new drama overlaps with the release of “Feedback.” Zuny assured the group, however, that she was confident she could “handle [the busy schedule] physically.”

Sojung and Ashley also revealed that they had ambitions for acting, albeit of a different nature.

“I want to star in musicals,” said Sojung, who is known for her powerful vocals. “I am currently attending a lot of auditions but it’s a difficult journey … I have a lot to study and improve on.”

“My goal is to go to Hollywood and star in a comic role,” Ashley added.

For now, Ladies’ Code is fully dedicated to promoting the release of “Feedback.”

The group is set to release a four-part video series showcasing their everyday lives and behind the scenes footage of their music video.

The group shared that they won’t be too discouraged if their songs don’t chart high, but rather they hope to strengthen their image as talented singers.

“We want to top the charts, but there are a lot of artists releasing albums this week, so I think we’ll be happy if we’re just in the Top 20,” said Sojung.

The local music scene has had a flood of new albums released during the third week of May, with artists like Winner and EXID all releasing music.