Meet the Koreans giving away their life’s fortunes

Meet the Koreans giving away their life’s fortunes 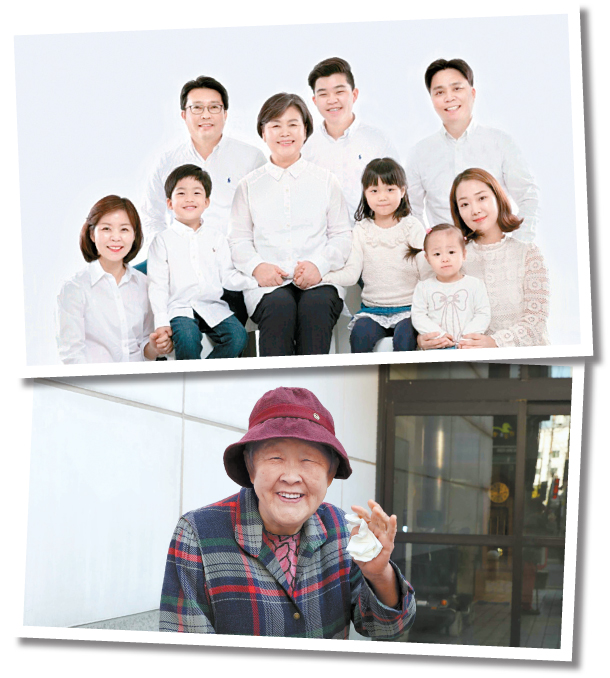 Top: Joo Sun-yong and her family pose for a photo. Joo recently designated the beneficiary of her 100 million won (＄84,133) insurance policy to a charity instead of her children. Bottom: Yang Young-ae, 83, smiles for the camera. She donated the 40 billion won that she earned selling fruit to Korea University. [KIM SANG-SEON]

Joo Sun-yong, 67, retired in 2013 after working as a minister at a chapel for 27 years. Instead of designating her children as the beneficiaries of her 100 million won ($84,133) insurance policy, she decided to pledge it to charity.

“Donating early [in my life], even a year earlier, allows me to feel happy longer as I am paying in advance [for that happiness],” said Joo. “Instead of leaving my children money, leaving them with their parents’ will to live a life of sharing is genuinely the most precious legacy that parents can give.”

Another woman in her 50s living in Gangnam District, southern Seoul, had a difficult childhood as her parents died when she was young. With the hard-earned money she saved throughout her years, she bought an apartment in Seoul and pledged it four years ago to a charity through a testamentary trust. The apartment, which was worth 800 million won at the time of her donation, is currently valued at 1.8 billion won. After her death and liquidating her donation, half of it will go to underfed children in Korea and the other half will go to help people overseas.

“If I give my legacy to a relative who [can already take care of themselves], they would have no better use for it except maybe riding in a Mercedes-Benz or playing golf,” she said. 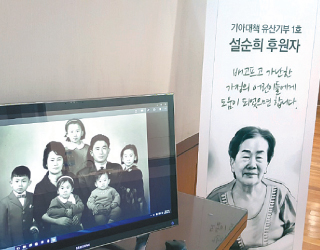 Yang Young-ae, 83, donated 40 billion won to Korea University in October 2018. These were her life savings that she earned through selling fruit.

“My fortune was hard-earned, so it would be sad to see it scatter [to different places] after I die,” said Yang. “There is no meaning to money if it is not hard-earned by oneself. It isn’t like my children will do better if I leave them my fortune.”

People donating their estates in Korea are increasing, but these cases are still relatively few compared to other countries.

Koreans are simply not used to pledging their assets to be donated to others after their death. Pledging one’s assets is a kind of planned donation where someone pledges in their will to donate a portion of their assets to a non-profit organization, a welfare group or a foundation.

Of total donations from individuals and companies, which amounted to about 12.87 billion won in 2016, less than 0.5 percent were from people donating their estates. Korea has a long way to go compared to pledges in the United States and Britain, which are 8 percent and 25 percent, respectively. Behind the numbers is support from the wealthy and government policies.

In the United States, the Giving Pledge was started by 40 billionaires including Microsoft founder Bill Gates and Facebook CEO Mark Zuckerberg to promote donating more than half of their wealth to charitable causes either during their lifetime or in their will.

“If you want to do something for your children and show how much you love them, the single best thing — by far — is to support organizations that will create a better world for them and their children,” said Michael Bloomberg, the former mayor of New York City.

Britain has gone a step further, cutting inheritance taxes for those who donate their legacy for goodwill. Inheriting a legacy more than £325,000 ($415,570) is taxed at 40 percent in Britain, but if a person decides to donate 10 percent of their inheritance, the government reduces the tax to 36 percent.

Experts in the field suggest that Korea should follow in the footsteps of countries like the United States and Japan by deducting donations from inheritance taxes after a person’s death.

Yoon Young-ho, a professor at the college of medicine at Seoul National University, surveyed 1,200 people over 19 and under 80 about their thoughts on pledging their assets in their will. Surprisingly, 54.5 percent said that they were open to pledging.

Experts also pointed out that Korea needs to revise its tax laws in order to promote pledging donations.

“[The government] needs to deduct taxes for those who donate through pledges in their will, similar to the benefits for donating during one’s lifetime,” said Lee Sang-sin, a professor at the University of Seoul’s graduate school of science in taxation. “[Korea] should offer tax deduction benefits similar to the United States and Japan. Since the inheritance tax amounts to just 2 percent of taxes, even if a portion of the inheritance tax or gift taxes is reduced, the [total amount of taxes] is increased through legacy pledging, so it benefits society as a whole.”

“[In Korea], charities designated by the court have 100 percent of their taxes deducted from their earnings,” said Yi Il-ha, the board president of Good Neighbors. “But for charities that receive donations after being designated [for pledges by donators], they have only 30 percent of their taxes deducted, which is an obvious discrimination in donations. We need to remove discrimination on tax deductions like developed countries do.”

Korea is not standing idly by, as there are efforts to spread a culture of pledging one’s assets. The National Assembly recently held a seminar on creating laws to promote asset pledging.

Participants suggested lowering inheritance taxes for pledgers, similar to Britain, revising laws regarding the legal portion of a benefactor’s inheritance, creating a pension for donating and simplifying the process of writing a will.

“Pledging one’s assets should be encouraged, as it narrows the blind spots of the welfare system that cannot be reached with taxes by the country,” said Won Hye-young, a member of the Democratic Party. “We plan to propose revisions to bills that present obstacles to pledging one’s assets as early as June.”