Former Foreign Minister Yun Byung-se requested a closed trial as he stood as a witness earlier this week in a judiciary abuse of power case, citing concerns that revealing classified material on the forced laborer issue could impact sensitive Korea-Japan relations. 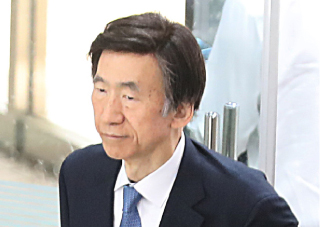 But the request was rejected, as the Seoul Central District Court sided with the prosecution and called for an open trial Tuesday.

Yun was testifying as a witness for Lim Jong-hun, the former deputy head of the National Court Administration, indicted for abuse of power charges in a judiciary scandal that also landed former Supreme Court Chief Justice Yang Sung-tae in prison in January. Former Chief Justice Yang has been accused of delaying the final verdict in the forced labor victims’ lawsuits to avoid giving the Park government diplomatic problems with Japan.

Yun, who served as foreign minister for former President Park Geun-hye, noted that “Korea-Japan relations are in an unprecedentedly serious situation” and that the Japanese government will also be “closely monitoring” the trial.

He conveyed concerns over testifying on classified material such as on the issue of compensation of Korean forced laborers during Japan’s colonial rule, which could reveal the government’s internal diplomatic policies and strategies. Yun said that he plans to “answer sincerely” but requested that the examination of the witness be closed-door.

However, a final verdict had been in limbo until the Oct. 30 Supreme Court ruling ordering Nippon Steel to compensate a group of Korean victims, a decision strongly protested by Japan.

Tokyo maintains that the 1965 treaty normalizing bilateral ties with Seoul, which provided the Korean government with an economic cooperation fund, settled all compensation matters.

However, Korea’s top court ruled that the 1965 agreement did not address the illegality of Japan’s 1910 to 1945 colonial rule, and found that the individuals’ right to file claims for damages had not expired.

Prosecutors said that Yun on Dec. 1, 2013, told Kim Ki-choon, then Blue House chief of staff, and Hwang Kyo-ahn, who served as justice minister at the time, that the top court’s 2012 decision on the forced labor compensation should be reconsidered, indicating that otherwise it would be difficult to find a political and diplomatic resolution to issues with Japan.

The Seoul court on Tuesday during Yun’s questioning revealed classified material related to the forced labor issue. Classified diplomatic documents are made public after 30 years under current law, but the documents that were revealed dated back only five to six years. The documents revealed by the prosecution showed the Park government Foreign Ministry’s involvement in delaying in the Supreme Court verdict on the forced labor case.

They also indicated that the Foreign Ministry expected unfavorable results if the forced labor compensation issue was brought to the International Court of Justice. Yun generally responded that he “does not remember being briefed” on the matter.

However, a prosecutor said, “The documents deal with our own internal discussions, not the content of negotiations with other countries. Unlike former Foreign Minister Yun’s claims, we did not determine there was any value in keeping them classified.”

The prosecution and court took the public’s interest in the matter into account when deciding to make the trial public.

An attorney who served as a former senior judge said, “In the case of trials dealing with a nation’s classified information, oftentimes the prosecution requests a closed trial,” but added that “such standards” did not appear to have been applied in the trials of Yang Sung-tae and Lim Jong-hun.

However, another judge-turned-attorney said, “It is the principle to have public trials, and if we make closed trials citing abstract reasons like the protection of national interests, that would rather lead to concerns that the trials would become subject to politics and public sentiment.”

A diplomat pointed out, “If classified diplomatic information is revealed whenever a new government comes into office, then no country will want to share sensitive information with us.”

The prosecution has not decided on the indictment of Yun or other high-ranking former Foreign Ministry officials who have been summoned as witnesses.

The Foreign Ministries of Korea and Japan on Dec. 28, 2015, signed a controversial deal aimed at resolving the wartime sexual slavery issue finally and irreversibly, which included an apology from Tokyo and a fund for the victims. The “comfort women” agreement was criticized by victims and civic groups from its onset, and the Foreign Ministry under Yun received backlash for not reaching out to the victims beforehand and listening to their views before abruptly agreeing to the deal.