Save the Children reaches 100

Save the Children reaches 100 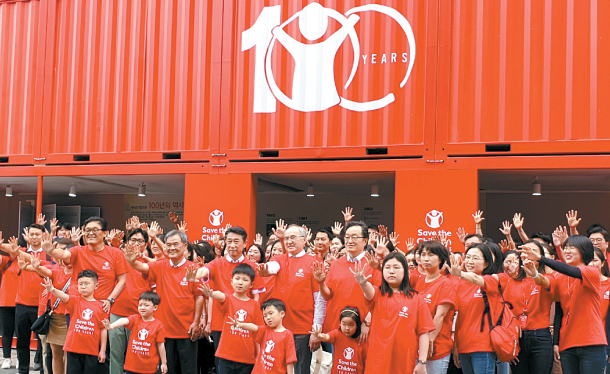 Staff and volunteers of Save the Children, including its chairperson Oh Joon, third from left in center, perform a gesture symbolizing “Stop the war on children” during a ceremony in central Seoul to celebrate the centennial anniversary of the group’s founding. [SHIM KYU-SEOK]

The international nonprofit organization Save the Children Fund held a ceremony at Cheonggye Plaza in central Seoul on Friday to commemorate its centennial.

This year marks a century since the nongovernmental organization, which provides humanitarian support to children around the globe, was established in Britain by social reformer Eglantyne Jebb to help the young in Germany and Austria-Hungary in the aftermath of the two countries’ defeat in World War I.

Since then, the group has grown into a global network of 28 national branches and one international body that work in tandem with the United Nations to aid children in over 120 countries. In Korea, one of the three Asian member countries of the organization, the centenary was marked at an event with the theme of “Stop the War on Children,” focusing on children in places like Syria, Yemen, Afghanistan and South Sudan.

According to Oh Joon, a former South Korean ambassador to the UN and current chairperson of Save the Children Korea, the organization distinguishes itself from other NGOs by not only providing field support to children in terms of humanitarian aid but also trying to enhance global awareness of children’s rights.

With over 100 volunteers and staff, all wearing red shirts emblazoned with the group’s logo, Oh pledged in an opening address Friday that Save the Children would build on its achievements over the last century to help children in need. The organization’s founding principle is that all children must be protected “no matter who they are or where they live,” according to the group’s website.

In addition to a ribbon cutting event that included a director of the UN Economic and Social Commission for Asia and the Pacific, who congratulated Korea’s rise from a recipient of Save the Children support to becoming a major donor to the organization, Friday’s ceremony also featured a photo exhibition of children in war-torn countries.

One communications officer said a view shared by nearly all the children the group works with in places like Syrian refugee camps in Lebanon was that they want to return to school and receive an education to help them rise above their current difficulties.

Oh explained in a press conference following the ceremony that one of the NGO’s priorities at present is to get the South Korean government to endorse an intergovernmental political commitment to protect students, teachers and schools in times of armed conflict called the Safe Schools Declaration.

A total of 87 countries around the world have joined the pledge, though South Korea has yet to. Save the Children’s efforts to enlist support from Seoul appears to have paid off, since the South Korean government has said it will take part in a global conference on the issue to take place later this month, where it may lend its endorsement to the declaration. Domestically, organizers say Save the Children Korea operates a budget of around 80 billion won ($66.9 million), 80 percent of which comes from small-scale donations of around 10,000 won or 20,000 won by individual patrons.

This financing, combined with government support, enables it to engage in a variety of children-related projects, which includes the operation of 20 foster homes across the country. Oh noted that because the practice of adoption is not common in Korea, these homes play an important role in ensuring many children without families are guaranteed care.

The organization also sponsors a variety of campaigns in Korea to promote children’s rights, such as ending physical and verbal abuse towards children or ensuring the young are guaranteed the “right to play,” as cited in the UN Convention on the Rights of the Child ? the 1989 agreement that grew out of an earlier declaration written by Save the Children’s founder Eglantyne Jebb. Save the Children was also one of the numerous humanitarian groups that had a presence in North Korea, but it had to cease operations last April as a result of international sanctions on the country’s economy.

Oh told the Korea JoongAng Daily that while the group ran a program in the North, it had to stop working there “because of the difficulties with sending money ... or paying for visits.”

“But we hope when things get better, we will be able to return to North Korea and resume our assistance to North Korean children,” he added.