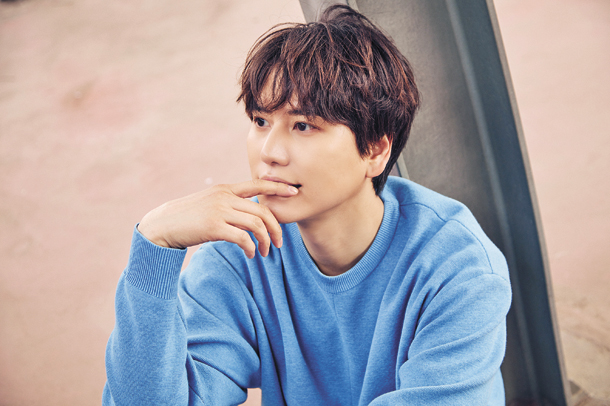 He said his goodbyes, but now he’s back. Singer Kyuhyun, a member of veteran boy band Super Junior, is back with his first new work in two years. His brand new EP, “The Day We Meet Again,” will be released today. It’s his first work since he began his military duties in 2017 and was discharged on May 7. It’s also a sequel to his last solo single, “Goodbye For Now,” which was released just before he began his military service.

“‘The Day We Meet Again’ was composed by the same team that wrote ‘Goodbye For Now,’” Kyuhyun said in an interview last Tuesday. “The team got back together and made a song just for me and my fans. I just had to sing it […] I wanted to sing so much while I was serving. I mean, you can sing in the car and in your house, but I wanted to sing for my fans. I wanted to show them everything I had inside of me, as fast as I could,” he said.

The reason he didn’t waste any time in coming out with new music was also because of his fans.

“People told me that half my fans would be gone when I came back from the military, which got me very worried. But when I met with fans at the same place that I met them before I started my military service, I was really surprised and happy to see that the seats were filled up, when I thought that they would be half empty. I’m willing to work my best for people who stuck by me like this, regardless of my fatigue.”

It’s been less than a month since Kyuhyun was discharged from his duties as a social service worker, an alternative to serving in the military after he suffered severe injuries in a car accident in 2007. He served two years at various public institutions, including a disabled persons’ care center, where he spent the most time.

“I actually learned a lot during my time at the care center,” he said. “I started seeing things that I hadn’t before. Like the fact that there are yellow tiles inlaid in the sidewalks for the blind. We had programs at the center that help people experience what it’s like being disabled, and I had the chance to experience it myself. Now, I ask [handicapped] people if they would like help when I see them on the streets. I learned a lot and felt a lot.”

He added that the past two years helped grow as a person, and gave him a good break from working as a singer. According to the singer, he had not had a chance to properly rest since joining Super Junior as a new member in 2006. The band debuted in 2005.

“I felt like it was a time for me to revitalize. When I debuted, I had trained for a mere two months. Everything felt so hard - singing, dancing, following the cameras. There were things I wanted to do, I got to do that. I took the time to learn new things like learn Japanese, play the piano, work out, dance and so on. And I didn’t get to see the Super Junior performances or the performance by fellow celebrities. I got to do all that, and it felt nice.”

“My voice is in the best state ever,” he added. “Right before I started my service, I couldn’t get myself to speak because my throat was so sore. But now, I’m willing to give everything I have, with my full-condition voice.”

Like fellow members of Super Junior, Kyuhyun has flaunted his versatile talents not just as a singer but also as a TV entertainer. His best stint was on MBC’s “Radio Star,” a position he took in 2011. His comments maintained the perfect balance of wit and sarcasm, and he earned two awards as an entertainer in 2012 and 2014. He’s already been made part of “Kang’s Kitchen” on tvN and “Salty Tour.” Why is he so popular? Kyuhyun has his “normalness” to thank.

“Celebrities have to be attention-seeking in some way,” he said. “I’m not saying that other people are out-and-out attention-seekers, but I’m just less outgoing than others. It’s a job requirement, but I’m less of that kind. I take the initiative when I have to, but I stay quiet when it’s time to stay quiet. I think that’s my strong point,” he said.

But sometimes he feels like his popularity is overrated, his past “glamorized” while he was away.

“I wasn’t that good, I don’t think, but I think people just remember the good things - which I’m really grateful for,” Kyuhyun said. “I was actually really surprised that people were interested in me. It even came to the point that it felt burdensome. Because if there are so many people interested in me, then there will be people pointing fingers at me. But at the end of the day, I’m happy about both the good things and the bad things, because they’re all mentioning my name.”

While Kyuhyun feels happy and thankful for the fact that he’s a singer, entertainer and musical actor all at the same time, the job isn’t without its difficulties. Having people love you and support you for the things they see on television means that there are people who hate you and deride you for those things, too. He’s well aware of the realities, which is all the more why he struggled.

“For over 10 years since I first became a singer, I haven’t been able to look up when I’m walking on the streets. I’m always looking down, or pretending to be looking on my phone. I was afraid when people looked at me. As a person, you can’t always look your best and look pretty. And if someone saw me in that state, like when you’re going to the supermarket in the neighborhood, then they could think I’m ugly or think something else. It’s become my habit to have my head down,” he said.

He added, however, “I do love the job. You get to do what you like, and eat nice things.”

Asked which role he would like to pursue the longest - member of a band, a solo singer, TV entertainer or a musical actor - he answered, “all of them.”

“I would like to sing for a long time. But I wanted to do so many more things. I want to do them all. But I’ll try my best, I promise you.”