Telling the story of those who have been left behind: ‘System Crasher’ looks at a child’s journey to find a loving home

Telling the story of those who have been left behind: ‘System Crasher’ looks at a child’s journey to find a loving home

An angelic, blonde-haired girl who could not be older than 10 lets out a bloodcurdling scream. She is standing outside her school where she has been to told to stay until she is able to calm herself. Yet instead of relaxing, she starts hurling everything in sight at a glass door that the adults are standing behind. “Don’t worry, the glass is unbreakable,” one of them says. As if to prove her wrong, the girl throws a rocking horse with all her might at the door, and the “unbreakable” glass shows its first crack.

This little tomboy’s name is Benni, and she is a system crasher - a term used in Germany used to describe children who cannot stay in one place. They are always revolting and rebelling against the system, and the system cannot find a place for them. Adults are afraid of her because of her raw, untamed energy and rage.

The film “System Crasher,” the winner of the Silver Bear Prize at 69th Berlin International Festival, was screened at the 20th Jeonju International Film Festival from May 3 to 10. It revolves around Benni, who struggles with trauma from her past and present. Living up the term, she is always on the move, going from one child care facility to another, causing problems and destroying things everywhere she goes. Benni’s turmoil and rage are depicted very convincingly by 9-year-old actor Helena Zengel.

The first task that she was given during an audition for the film was to “get that man out of the room.” She could use whatever language or actions she wanted, as long as she was able to complete her mission. What the director wanted to see the most was whether she dared to use swear words without hesitation, which the majority of the other girls who tried out for the role refused, although they were given permission to do so.

“I said to Helena, ‘O.K., look, it’s not about Helena or Benni, and you can use really, really bad words to get him,’” the director Nora Fingscheidt said in an interview with Korea JoongAng Daily. “She also had fun doing it in a playful way, because [in the role] you’re allowed to do what you’re never allowed to do.”

Zengel was also physically capable to portray Benni’s wild energy, as she was studying ice skating five times a week at the time. “I would tell her ‘Now, this is very elegant what you’re doing, but now get the gorilla inside of you out.’ Then she could switch and transform physically.” 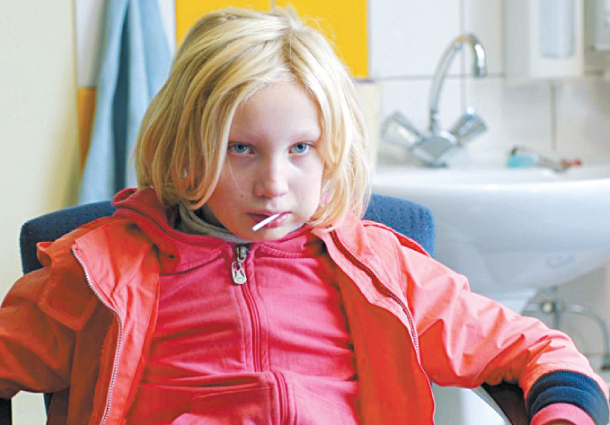 A scene from “System Crasher,” in which the character Benni stares angrily at her child care providers while they attempt to reprimand her. [JEONJU INTERNATIONAL FILM FESTIVAL]

At the same time, Zengel was able to capture Benni’s vulnerability. Benni seeks attention and love from adults like any other child, and when Benni is neglected or rejected by them, or when she suffers from her trauma, the audience can sympathize with her. Fingscheidt admitted that for some, Benni is already a bit too much, but she said that was fine because Benni is also too much for the people in the film too.

The idea for the film came while the filmmaker was working on a documentary about a shelter for homeless women. “One day this 14-year-old girl moved in and I was shocked,” the director said. “I asked the social worker why a 14 year old would live here and she said ‘Oh, she’s a system crasher. We can always take them in on their 14th birthday,’ so there was a moment when I was like ‘What’s this?’”

She found out that other institutions were afraid to take the girl in. Fingscheidt was fascinated by her tale, and that was the beginning of six years of research into the world of system crashers.

The director also wrote the script for this film, and she told the press that almost all of Benni’s story is borrowed from real-life characters. She interviewed many children and about 70 social workers while researching the story, and one commonality she discovered among all of the children was their untainted energy, no matter how hard or difficult their lives were.

“I think there’s a big beauty in this pure energy,” Fingscheidt said. “I think that can turn into depression as teenagers, but as long as they’re little - even if they’re traumatized and they’ve lived through horrible things - they can still switch and play and run around. That’s something which was really heartbreaking to see.”

Yet Fingscheidt never told the children’s upsetting backstories to the actor. Zengel was always acting out in the moment because it was important to the director to not traumatize her.

“We only worked with Benni’s character saying [things] like ‘Oh, it’s just in the moment. Benni is now really angry because she wants to go to mama and they forbid her to go to mama’ or when mama’s new boyfriend comes home then we were saying, ‘You have seen how he hurts mama and your siblings so you really want to protect your family and he has to leave the apartment,’ but nothing more.”

There are facilities for children like Benni in Germany, but being 9, she is too young to be accepted by them. Even if she makes it to one of these facilities, there is a chance she could end up in the streets, like the 14-year-old girl the director saw in the homeless shelter.

The children admitted into these facilities must meet three conditions in order to stay: They cannot make fires in their rooms, they cannot be violent toward the adults and other children in the facilities, and they must not attempt suicide.

If they are rejected by multiple facilities, then system crashers like the 14-year-old girl, drift on the streets without a permanent home. Yet this is extremely rare, as 90 percent to 95 percent of children in the child care system stay in their homes, according to Fingscheidt.

The country is currently working on solutions for extremely traumatized children, establishing special childcare institutions with only three children in order to provide more space and possibilities.

“I met a boy, he was 11, and he had been in 52 different institutions and that really destroys your soul. You can never attach to anyone,” the director said solemnly.

When asked whether the actor felt any pressure playing the role, the filmmaker laughed and said, “[I think] for children, they have more capacity [to take in any kind of role they’re given]. When we were on a break on the set, I would sometimes visit Helena’s room and I would see her rolling around the floor, playing with her babysitter. She would pretend she was a dog and that the babysitter was teaching the dog tricks - and that was her way of letting out the tension.”