Ceremony in Gwangju riles up divisions

Ceremony in Gwangju riles up divisions 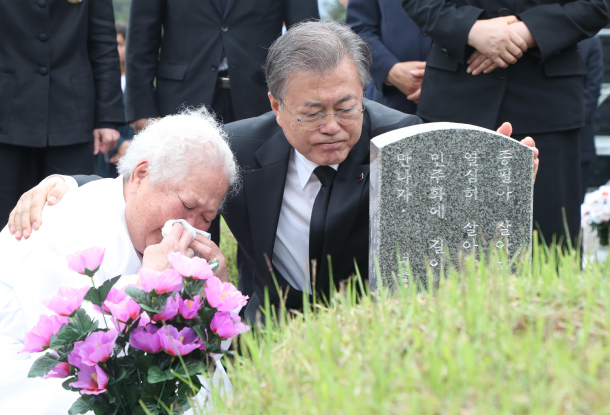 At the May 18 National Cemetery in Gwangju on Saturday, President Moon Jae-in consoles an elderly woman at the tomb of her son, who was killed during the May 18, 1980, Gwangju Democratization Movement. [YONHAP]

The ideological rift in Korean politics was again laid bare at a ceremony on Saturday marking the 39th anniversary of the May 18 Gwangju Democratization Movement.

In an address at the ceremony, President Moon Jae-in called for the movement to be spared further politicization on partisan grounds.

“Over 20 years ago, we already reached a public consensus on the historic significance and character of Gwangju May 18, and completed a legal definition [of the event],” Moon said. “There is no need for further controversy.”

The president went on to specifically address the denigration of the movement by a number of conservative politicians, saying he was “ashamed of the reality that [certain people] still loudly broadcast rhetoric denying and insulting May 18.”

The Gwangju movement was probably the most important milestone in Korea’s struggle for democracy in decades past, but remains ever subject to intense dispute over its significance between opposing ideological sides in the country.

From May 18 to 27, 1980, thousands of citizens joined a public uprising in the southwestern city of Gwangju to protest Chun Doo Hwan’s seizure of power in a military coup five months earlier. Chun’s military junta deployed troops to the city in a brutal crackdown that resulted in at least 193 dead by official count.

Denouncing the movement as a riot, the military government at the time declared martial law and a press embargo to prevent public knowledge of the crackdown spreading beyond Gwangju. Yet the brutality of the event was the spark of a struggle for democracy that ultimately culminated in the nationwide protests in June 1987 that gave birth to Korea’s current democratic system.

Yet 39 years later, parts of the crackdown remain shrouded in mystery, such as the exact number of its victims, whether troops fired upon the public with a machine gun from a helicopter and the culpability of the highest figures in the regime in ordering the troops to open fire. 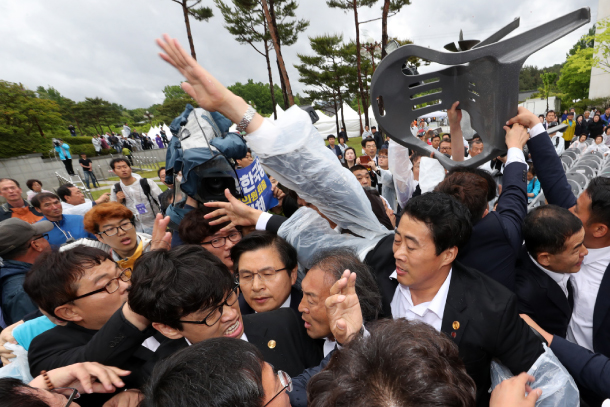 The arrival of Hwang Kyo-ahn, chairman of the main conservative opposition Liberty Korea Party, is protested at the memorial for the May 18 Gwangju Democratization Movement at the May 18 National Cemetery on Saturday. [YONHAP]

Under the Moon administration, the Defense Ministry launched a special investigative committee into the massacre that confirmed troops committed acts of sexual assault on civilians and had indeed rained down bullets on protesters from a helicopter. In February 2018, Defense Minister Song Young-moo acknowledged the findings of the committee and issued a public apology to the victims.

Yet among many conservatives, particularly those who view the authoritarian governments in a positive light, May 18 is nothing to glorify. In February, three lawmakers from the main opposition Liberty Korea Party (LKP) stirred public controversy by suggesting the movement was a riot that had been disguised as a democratization movement - all orchestrated by the North Korean military.

In spite of an overwhelming anger among Gwangju citizens, the LKP’s new chairman, Hwang Kyo-ahn, only gave a slap on the wrist to those lawmakers. Unsurprisingly, his attendance at Saturday’s ceremony in Gwangju provoked protests from citizens, some of whom threw water bottles and plastic chairs at Hwang as he entered the grounds of the event.

Hwang’s conduct during the ceremony was subject to intense media scrutiny. One surprise was that he joined a chorus singing the “March for our Beloved,” the most iconic song symbolizing Korea’s struggle for democracy, written in the aftermath of the Gwangju massacre in 1981.

The willingness of conservative politicians to sing this song is usually regarded as a measure of their acknowledgment of the democratization movement. The last time Hwang attended the Gwangju Movement anniversary ceremony was in 2016. He was prime minister for the Park Geun-hye government and he kept his lips sealed with an emotionless expression when the song was sung. When the song was played during a Labor Day marathon earlier this month, he mouthed some of the lyrics.

In Gwangju on Saturday, Hwang did not join the applause during and after President Moon’s address and exited the area almost covertly through a back entrance after the ceremony ended. Some pundits argue that Hwang’s decision to attend the ceremony amid clear signs that he would not be welcomed was intentional. While it may have been a conciliatory gesture to mollify moderates ahead of next year’s parliamentary elections, he could also be trying to rally conservatives by demonstrating that he stood up to resistance leveled against him in Gwangju, the heartland of Korean liberalism.