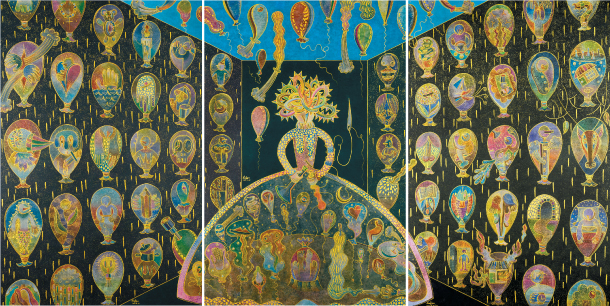 An art exhibition that may inspire viewers to get into a lotus position and start meditating opened at Gallery Su: in central Seoul last week.

The show, titled “Samatha & Vipassana,” features four well-known contemporary Korean artists, who have not been grouped together before, in the context of Buddhist meditation practices. The artists are Kim Yong-ho, Choi Sun, Fi Jae Lee and Goun Seo.

Samatha and vipassana, Pali words that translate to tranquility and insight, are two states or qualities of mind developed during meditation. “They are regarded as the essential methods of practice toward enlightenment,” explained Byun Hong-chul, CEO of the art consulting company Graywall, who curated this exhibition.

The exhibition starts with Kim Yong-ho’s peaceful and spiritual photos of lotus leaves taken from the surface of a pond. They are titled “Pian,” the Korean Buddhist term that originates from the Sanskrit word “Paramita” and refers to the land of perfection or a level of nirvana. 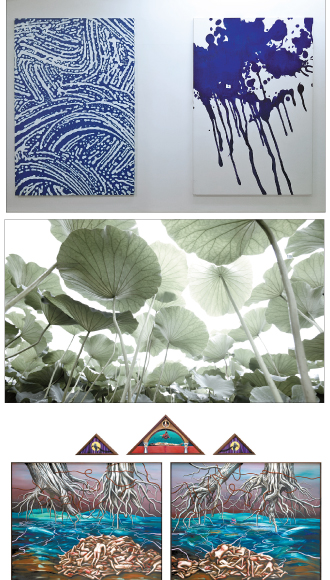 The show then leads to Choi Sun’s abstract paintings on the first and second floors. The blue-violet patterns on white canvases are beautiful, but actually represent the shapes of saliva spat on the street or the patterns of water at a sewage disposal plant that the artist observed in person. They are named the “Bruised Saliva” series and the “Wastewater Painting” series.

“I want to question what art is by letting things displeasing and decomposing and deforming over time hang on the walls under the disguise of decoratively beautiful paintings,” Choi said in the preview.

“His paintings can also be viewed from the perspective of the Buddhist idea ilcheyusimjo, meaning that everything is only the product of the mind,” Byun said, referring to the famous story of monk Wonhyo (617-686). One evening during an arduous trip, the important Buddhist philosopher found himself in a heavy downpour and took a shelter in a dark cave. He was very thirsty, so when his hand touched what he thought was a bowl full of rainwater, he gulped it down, thinking the water was cool and sweet.

Yet in the morning, he discovered that he slept in an old tomb and the bowl was actually a human skeleton with strange water in it. Disgusted, he vomited. However, he soon realized that the water was the same water that had refreshed him, and so he then reached the enlightenment known as ilcheyusimjo.

In one room on the second floor are Goun Seo’s surreal paintings about death. Among them is a folding screen that depicts a dead man’s body decaying in four stages, which must have been inspired by Kusozu, a Japanese Buddhist painting genre that depicts human decomposition in nine stages - mainly of a beautiful woman - to remind viewers of the transience of the body and physical world.

Fi Jae Lee’s paintings and sculptures include the magnificent triptych, where the artist applied the traditional Korean technique used for Buddhist altar paintings and used various colors and golden pigment. The painting, titled “Egg of Ego,” depicts a woman who looks like a primitive goddess with large eggs.

The painting tells the story of the artist herself but will also help viewers look into themselves, Byun said.

“This exhibition is not about a certain religion,” he said. “You know those who practice meditation would say they are ‘spiritual but not religious.’ I have brought Buddhist theory about meditation here, just because it explains what I experienced during meditation a year ago. I think it wouldn’t be different from Christian prayer and meditation. And samatha and vipassana are also the methods of creating visual art, in my opinion.”