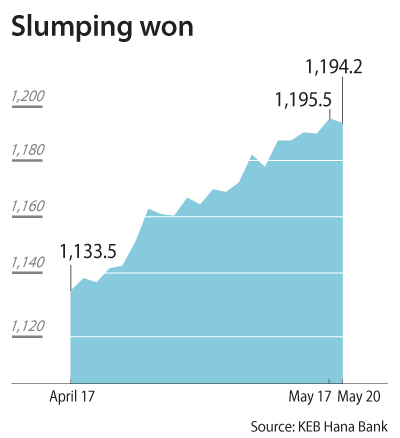 “The conflict between the United States and China is getting worse and there’s a strong possibility that it could seriously affect our economy,” Hong said at a government meeting Monday morning.

“The government will take appropriate actions if the volatility in the financial market worsens.”

Hong said the government will be prepared for every situation - particularly a drastic weakening of the local currency.

On Monday, the Korean won actually appreciated slightly against the U.S. dollar, closing at 1,194.2 won against the greenback, which was 1.5 won less than on Friday, or 0.13 percent.

But if it breaks the 1,200 won barrier, it will be the first time in two years.

Hong said the government will implement temporary measures to help Korean exporters, including fresh trade financing worth 500 billion won ($418.5 million) as well as expanding export marketing support. Trade with China and the United States accounts for 39 percent of all Korean exports.

The depreciation of the won against the U.S. dollar isn’t always bad news, especially for exporters, but it makes imports more expensive and the government is reluctant to actively engage when the won depreciates.

According to a Daishin Securities study, Korean’s exports in dollars rose 2 percent in April compared to the same month a year ago. But when converting the figure to won, Korea’s exports expanded 4.7 percent.

Some experts say the effect on foreign exchange rates on Korea’s exported goods is not as strong as in the past because Korea is exporting more valuable products. Slightly higher prices don’t affect such exports as much.

“The influence of foreign exchange rates on Korean exports has been reduced compared to the past,” said Moon Byung-ki, a senior researcher at the Korea International Trade Association. “[However,] excessive appreciation of the U.S. dollar could affect Korean companies’ profits while weakening price competition.”

The trade association estimates that when the won depreciates 10 percent against the U.S. dollar, Korean manufacturers’ operating profit margins drop 1.3 percentage points. The automotive and ship industries see their operating profit margin fall 4 percent while that of electric and electronics goods retreats 3 percent.

While the won hasn’t reached the 1,200 won threshold, it could.

“The heated demand for dollar purchases is not stabilizing, and since May 9 it has been getting worse especially since foreign investors have been selling off nearly 1.7 trillion won worth of stocks [from the Kospi bourse between May 9 and May 17],” said Min Kyung-won, a Woori Bank researcher.

“The won in the short-term could depreciate to as much as 1,220 won against the U.S. dollar.”

The selloff by foreign investors is alarming considering that they have been net buyers of Korean stock since January.

This instability could continue this week as the United States and China have shown scant signs of coming to agreement on trade, especially with U.S. President Donald Trump insisting that higher tariffs against China are benefiting the United States.

According to Hana Financial Investment, $1.67 billion of investments last week were withdrawn from global equity funds investing in emerging markets.

The Korea Center for International Finance noted that global investors are seeking safer assets in the current trade conflict environment.