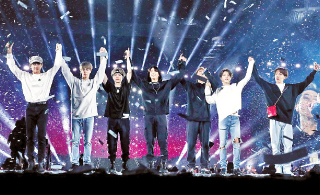 BTS set another record on Sunday evening, becoming the artist with the most music videos with over 100 million views after the music video for their 2018 track “Singularity” reached the threshold at 6:50 p.m.

According to Big Hit Entertainment, this is the band’s 20th music video to have been seen over 100 million times on YouTube. The group’s 2018 video titled “Serendipity” reached 100 million views on May 16.

“Singularity” is the intro song for the group’s 2018 album “Love Yourself: Tear,” which reached the top of the Billboard 200 on June 2 last year, and remained on the chart for 15 weeks in a row.

BTS finished their U.S. stadium tour on Sunday in New Jersey, and performed for a total of 320,000 fans over the course of six shows in three cities.

The tour continues to South America this weekend, where the group will perform for fans in Sao Paulo, Brazil.

In addition to its ongoing tour, the group also revealed that an exhibition about the boy band’s journey titled “24/7=Serendipity” will be held in New York from June 7 to July 11.

Meanwhile, BTS’s agency Big Hit Entertainment announced on Monday that it will be holding a round of auditions across North America to find talented producers and help them grow.

“Big Hit Entertainment will be holding ‘Next New Creator North America’ to [grow] the global music market,” the agency said.

Any music producer living in the North American region - regardless of their gender, nationality or age - is eligible to apply. The winner will be given $5,000.