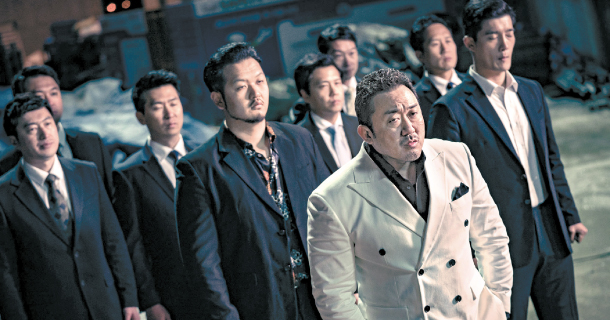 “The Gangster, The Cop, The Devil” had a huge opening in its debut week, attracting over one million moviegoers to see actor Ma Dong-seok’s action-packed flick. The actor plays a gangster boss looking for revenge against a serial killer who nearly killed him. [ACEMAKER]

After three weeks atop the local box office, “Avengers: Endgame” finally fell to local crime-thriller “The Gangster, The Cop, The Devil” over the weekend.

Even before “The Gangster, The Cop, The Devil” hit theaters last Wednesday, it was a hot topic on social media after news that the film sold its distribution rights to more than 104 countries, based on the popularity of the film’s star Ma Dong-seok.

Another crime-thriller featuring Ma’s character punching through every obstacle he faces seems to have charmed audiences, with more than 1.1 million tickets being sold over the weekend in 1,307 screens.

The film tells the story of two men from opposite sides of the law - a gangster boss and a cop - becoming unlikely allies, collaborating to catch a serial killer known as K. The boss is played by Ma, and he is determined to catch the killer who almost took his life. 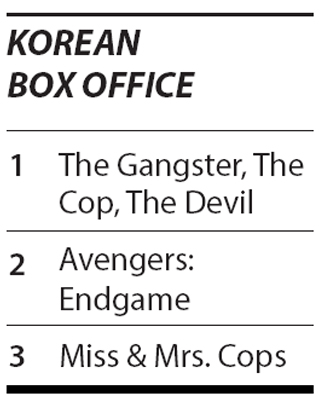 Ma’s characters often use their incredible strength to overcome adversity and audiences keep coming for more. His roles often have similar backgrounds to superhero characters, but their strength is portrayed more realistically and the plots are closer to reality.

“Avengers: Endgame” lost the top spot after selling 389,000 tickets at 958 screens. Although it failed to be No. 1 for four consecutive weeks, the film finally surpassed “Avatar” by attracting more than 13.4 million moviegoers and comfortably reaching fifth on the all-time box office sales rankings. “Endgame” is now the top-selling foreign film in Korean history.

“Miss & Mrs. Cops” finished the weekend in a close third, selling nearly 372,000 admissions in 885 screens. The female-lead film about two police detectives who must catch a criminal in under 48 hours offers plenty of action and laughs. It hit the one-million-ticket milestone despite receiving poor reviews before it premiered. The film addresses sensitive social issues that have been in the news in recent years - illegal sex videos spread online and drug abuse.

“Pokemon Detective Pikachu” ranked fourth, selling 123,000 tickets at 615 screens. Although the film failed to top the local box office, it has remained in the top five since its release.

“Juror 8” landed at a disappointing fifth place during the week of its debut. The film only drew about 120,000 moviegoers at 648 screens.

Inspired by a real event, the movie tells the story of eight jurors who come together and take great pains to solve what seemed like a clear-cut murder case under the guidance of a strict chief judge named Jun-kyeom.