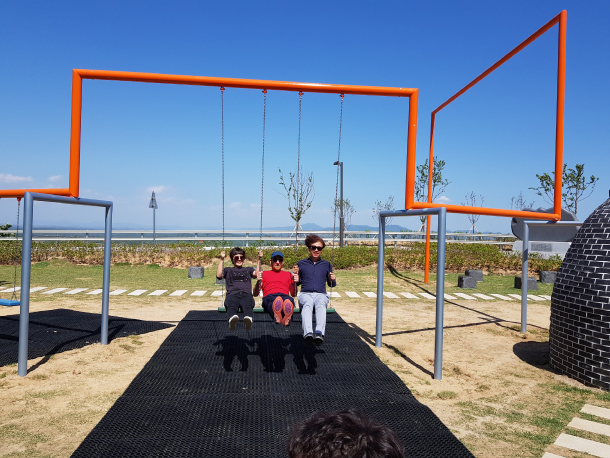 “One Two Three Swing!” by the famous Danish artist collective Superflex has been installed as part of the Real DMZ Project at the Dora Observatory in Paju, Gyeonggi, which overlooks the demilitarized zone (DMZ) and North Korea. From left, Kim Sunjung, the Gwangju Biennale Foundation’s president who founded the project, artist Jakob Fenger of Superflex and Real DMZ Project head Zoh Kyung-jin take a swing on the work that invites audience participation. The piece, which premiered at the annual Hyundai Commission at Tate Modern in London in 2017, is a “sculpture infrastructure” that has multiple three-person swings in which sitters should “move together” to enjoy the swing, according to Fenger. “There are three members in our collective and [is also] the minimum number of people to make a group,” the artist said. “When we move together, we can change things.” Superflex uses art as a tool of changing life and public situations, the artist added. “Superflex has been interested in Korean issues for a long time, since they participated in the 2002 Gwangju Biennale,” Kim said. “The collective and I have discussed installing a work of theirs near the DMZ for several years and we finally realized it this year, along with help from the Danish Embassy, in celebration of the 60th anniversary of Korea-Denmark diplomacy. [MOON SO-YOUNG]