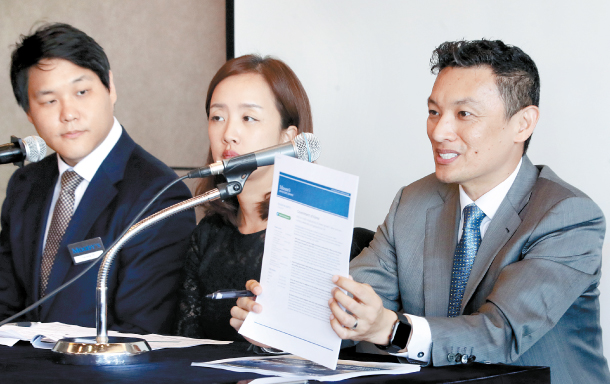 Christian de Guzman, vice president for sovereign risk at Moody’s Investors Service, speaks about Korea’s credit rating and long-term fundamentals Tuesday during a press event held at the Lotte Hotel Seoul in the Jung District, central Seoul. De Guzman said Korea, a trade-dependent country, is projected to grow 2.1 percent this year as the trade conflict between China and the United States continues. He believes Korea, along with Japan, Germany and Mexico, is vulnerable to auto import tariffs from the United States. Yet he did not see the need to change Korea’s sovereign credit rating of “Aa2,” as the country’s debt structure remains sound when compared to other developed economies. De Guzman added that the country’s proposed supplementary budget of 6.7 trillion won ($5.61 billion) will greatly help Korea’s growth. [YONHAP]