The Korean government’s dividend income from stakes in companies fell 20.4 percent in 2019, the Ministry of Economy and Finance said Tuesday. 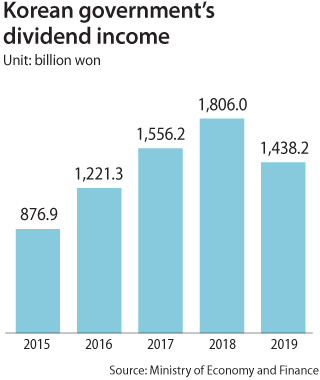 The number is even lower than the 1.56 trillion won collected in 2017.

The companies that made dividend payments to the government include the Korea Airports Corporation, the Korea Development Bank and Korea Gas Corporation.

The ministry said the decline in dividend income came as 21 public-sector companies reduced payouts by 1.5 trillion won so they could increase investment, restructure and increase their export competency.

Data show that 17 companies, including five energy companies, did not pay out dividends at all as they reported net losses.

The net profits of these institutions have been on a steady decline for a number of years, falling from 15.4 trillion won in 2016.

Experts have also pointed out that net profits of public energy companies shrunk as a result of the changes in energy policy.

Annual operating profit of the Korea Electric Power Corporation (Kepco) declined from 4.9 trillion won in 2017 to a loss of 208 billion won last year.

Some predict that energy company losses will increase this year as the current administration is continuously pushing to limit the production capacity of existing coal power plants and increase the taxation of their environmental impact.