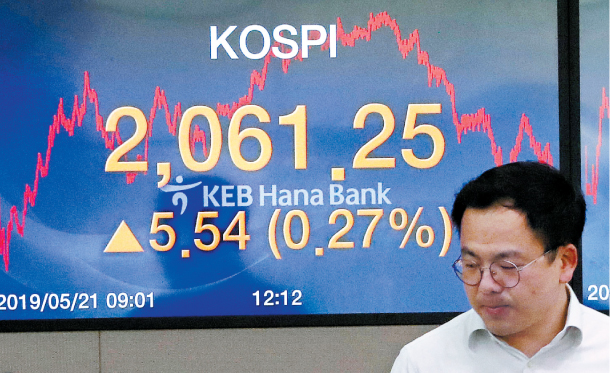 A signboard at KEB Hana Bank in central Seoul shows the Kospi up on Tuesday as U.S. sanctions on Huawei give Samsung Electronics’ stocks a 2.74 percent boost. [NEWS1]

The boost in investor sentiment follows a score of U.S. tech firms like Intel, Qualcomm and Micron deciding to halt business with Huawei, following the Chinese company’s inclusion in the U.S. government’s trade blacklist last week on national security concerns.

Among those U.S. companies was Google, which Reuters reported Monday will stop providing software and hardware to Huawei, only leaving access its open source products. This means that future Huawei phones will only be able to run on freely available versions of the Android operating system without access to Google’s app store and services like Gmail, YouTube and Chrome.

Hi Investment & Securities Analyst Ko Eui-young said in a Tuesday report that Google’s decision will have a much bigger impact on Huawei more than the loss of its component suppliers.

“The impact on sales inside its home country won’t be big because the Chinese market is outside of Google’s reach anyway,” it said. “But maintaining market share outside the country will be difficult because, from the customer’s end, the limit on Google’s core services greatly pulls down the incentive to buy Huawei phones.”

Last year, 48.9 percent of Huawei phones were sold outside China.

The general consensus among analysts is that Huawei’s retreat will benefit Samsung’s smartphone business.

The second-largest phone maker in the world, Huawei has been rapidly narrowing the gap with industry No. 1 Samsung Electronics. These two currently dominate the Android phone market in the high-end price range.

According to the International Data Corporation, Samsung had a 23.1 percent market share in the global smartphone market during the year’s first quarter, while Huawei had 19 percent. Until recently, Huawei’s rapid growth had experts saying it wouldn’t be too long until the Chinese tech company took the lead in the product sector.

Another Tuesday report from Eugene Investment & Securities said that the effect Samsung will reap thanks to Huawei’s limited business will be “substantial in size.”

“Considering the fact that Huawei’s fierce marketing in mid-priced and premium smartphones took away a lot of Samsung’s market share, the event is expected to have a positive influence in Samsung recovering its global stance,” it said.

According to Eugene’s scenario, Samsung’s operating profit could hit 1.35 trillion won if it succeeds in winning back 50 percent of Huawei’s smartphone sales in non-China regions. Market research firm Strategy Analytics predicted that Huawei’s phone sales would shrink to 156 million units this year, from 205 million last year, if the United States continues its sanctions.

However, from Korea’s perspective, Huawei is not only a competitor but also a client for component suppliers including SK Hynix.

“It isn’t good news for component suppliers - after all, Huawei is the second-largest player in the smartphone industry,” said an industry source. “But if the blow is big, chipmakers will set out to find new clients like Samsung which may benefit from Huawei’s retreat. If these other clients can absorb this demand, the market won’t change much.”

Analyst Doh Hyun-woo from NH Investment & Securities, however, pointed out that in the long run, the issue may turn out to be a negative one for global IT demand, especially for the “5G momentum” that Huawei was leading in terms of developing network equipment.