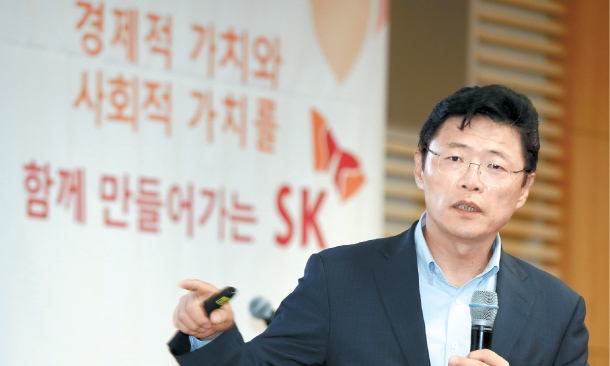 SK Group unveiled how much social value it judges its major affiliates to have generated in the past year on Tuesday, promising to share the information on an annual basis from now on.

The country’s third-largest conglomerate by assets has been a big promoter of social value, with the group’s chief, Chey Tae-won, repeatedly saying that it has become crucial for companies to pursue social - not just economic - value in order to survive.

In line with that belief, 50 percent of the key performance indicators for SK affiliates will be related to social value from the end of this year.

Data for three SK units - oil refiner and battery maker SK Innovation, mobile carrier SK Telecom and chipmaker SK Hynix - were revealed first on Tuesday. The group pledged to open up data for 16 affiliates this year, with more to follow in the long term.

The social value was unveiled in three separate categories.

The conglomerate said SK Innovation registered steep deficits in business performance, largely due to carbon dioxide emissions, waste and other pollutants in the company’s manufacturing process.

The mobile carrier was able to record positive social value in business performance thanks to steps several of its businesses took to increase social security and safety using digital technology. For instance, users of the carrier’s navigation app T Map can get discounts on car insurance fees by up to 10 percent based on their driving habits monitored by the app. SK Telecom said such constant driver monitoring by the app also helped reduce car accidents.

Based on the group’s calculation method, the T Map service was found to have generated 48.7 billion won in social value, under the category of business performance. In the formula to calculate social value, several factors, like the accident rate of non-T Map users, accident rate of T Map users, the number of T Map app subscribers and the average cost incurred to recover damage from a car accident, were considered.

A spokesperson for SK said that the figures will help affiliates set targets to improve sustainability in the future, reduce their carbon footprint in manufacturing and develop more eco-friendly products like SK Innovation’s environmentally-friendlier lubricant oil and electric car batteries.

SK’s measuring system was developed over the last three years by in-house experts, business stakeholders and professionals in academia and consulting, with skill sets ranging from economics and accounting to sociology and corporate social responsibility. The group, however, acknowledged that its system is not perfect as it has not found a way to measure social value from various relevant factors such as losses incurred by consumer damage and the impact of improving corporate governance structure.

The group said it will continue to improve its measuring system.

“It took more than 100 years for current accounting systems to measure economic value after they went through lots of trials and errors,” said Jung Do-jin, an accounting professor at Chung-Ang University and head of the Korea Accounting Information Association. “SK’s efforts to measure social value will be a new milestone in corporate management.”