Chairman Hwang Kyo-ahn of the Liberty Korea Party (LKP) on Tuesday lashed out at President Moon Jae-in for calling the conservative opposition party “heirs of a dictatorship,” saying that label is best reserved for North Korean leader Kim Jong-un.

“This administration is calling us an heir of a dictator, but isn’t Kim Jong-un the real heir of a dictator?” Hwang said after he laid flowers before the statue of U.S. Gen. Douglas McArthur in Freedom Park in Incheon. 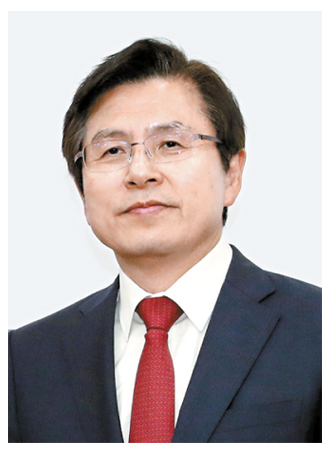 “He cannot say a word to the heir of the real dictator, so this is why he is called the spokesman [of North Korea],” Hwang said. “President Moon must say that Kim is the real heir of a dictator. Isn’t Kim the most evil dictator in the world?”

Hwang made the remarks in response to Moon’s speech on Saturday to mark the 39th anniversary of the May 18 Gwangju Democratization Movement. In the speech, Moon issued a sharp criticism of recent attempts by some conservative politicians to undermine the significance of the democratic uprising in 1980.

“The truth about May 18 cannot differ between conservatives and liberals,” Moon said. “That’s because the values that Gwangju struggled to protect were none other than freedom and democracy. The only ones who could view May 18 in a different light are would-be heirs of a dictatorship.”

Moon said the country has reached a national consensus on the historic significance and nature of the Gwangju democratization movement.

“No more controversies about this issue are necessary now. They would simply be a meaningless waste,” he said.

Moon was clearly referring to the recent political storm around the Gwangju movement stirred by the LKP. In February, three LKP representatives provoked public outrage by denigrating the democratic uprising, claiming that it was a riot instigated by North Korean agents. The LKP leadership recently decided to only issue light disciplinary actions against the lawmakers, and they have not yet been implemented.

“How come I am labeled as an heir of a dictator?” Hwang said Tuesday. “It is an absurd remark that I no longer want to respond to.”

Hwang then said he won’t accept Moon’s invitation to meet with leaders of five political parties to discuss a plan to send food aid to the North.

“Is now really the right time to have such a discussion?” Hwang said.

After Moon made the speech in Gwangju on Saturday, the LKP leadership, including Hwang, refrained from reacting to the comments. According to party sources, they wanted to address the Moon administration’s failure to handle South Korea’s economic problems and avoid an ideological confrontation.

Hwang, however, changed his attitude on Tuesday, directly calling Moon out for labeling LKP leaders heirs of South Korea’s dictatorship.

“While he is so obsessed with North Korea, the worst dictatorship on earth, Moon is always taking aim at the opposition party,” said a senior LKP official. “A consensus was made that the current administration’s double standard must not be overlooked, and that led to Hwang’s comment.”

Hwang attacked Moon at a symbolic venue for conservatives. Freedom Park in Incheon was named in 1957, when the statue of U.S. Gen. McArthur, who led the Incheon Landing Operation during the 1950-53 Korean War, was erected. About 200 supporters of Hwang gathered at Freedom Park to cheer for him.

Anti-American, progressive civic groups are currently demanding that the statue be removed, which has brought backlash from conservatives. Hwang’s decision to lay flowers before the statue was clearly an attempt to highlight the identity of the LKP as a conservative party that promotes the Korea-U.S. military alliance.

“We have many heroes, but we must not forget the heroes of this blood-forged ally,” Hwang said. “The Moon administration has no interest in national security and it is concentrating its efforts to pour money into the North.”

“Words reflect a man’s class,” she said. “Every day, we hear remarks that make the people loath politics and that divide the people.”