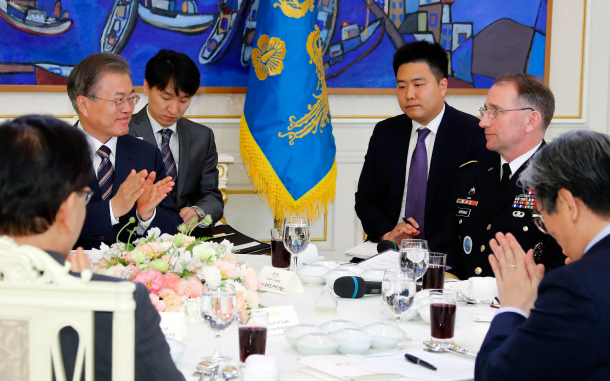 A calm response by the Korean and American militaries to North Korea’s latest provocations have prevented a derailing of denuclearization negotiations, President Moon Jae-in said Tuesday in a meeting with top commanders of the two countries.

“The firmness of the South Korea-U.S. alliance and close cooperation of the two countries were clearly evident during our joint response to North Korea’s recent launches of projectiles that include short-range missiles,” Moon said during a luncheon with leaders of the Korean military and U.S. Forces Korea (USFK).

“Because the two countries issued a very calm and restrained message in a united voice amid their cooperation, we were able to maintain the momentum of dialogue as long as the North does not stage new, additional provocations,” he said. “I express my serious appreciation to the military leaderships of the two countries.”

It was the first time Moon invited top commanders of both Korean troops and the USFK to the Blue House since he took office in May 2017. The meeting took place ahead of U.S. President Donald Trump’s visit to Korea in June. Seven top leaders of Korea’s military including Defense Minister Jeong Kyeong-doo; Gen. Park Han-ki, the chairman of the Joint Chiefs of Staff; and Gen. Choi Byung-hyuk, deputy commander of the USFK, attended the luncheon. Five from the USFK, including Gen. Robert Abrams, commander of the USFK, attended.

It was the first time General Abrams, who assumed his post last November, visited the Blue House. Moon expressed appreciation for his service as well as his father’s during the Korean War in opening remarks.

Moon said an improvement in inter-Korean relations and eased military tensions on the peninsula help denuclearization negotiations between Washington and Pyongyang.

“The second U.S.-North summit in Hanoi[, Vietnam,] ended without an agreement, but the momentum of dialogue is still maintained not only because of personal trust between President Trump and North Korean leader Kim Jong-un, but also due to the changed mood on the Korean Peninsula,” he said.

Moon added that the Korea-U.S. alliance plays a key role in maintaining peace and stability on the Korean Peninsula as well as in all of Northeast Asia. “Even if peace is established on the peninsula with the power of the alliance, the role of the alliance will remain important for the peace and stability of Northeast Asia,” he said. “To this end, the alliance is never a temporary one. I believe it is a permanent alliance that will be developed further for greatness.”

Abrams, then, expressed his appreciation for the invitation. He said the Korean military has made a historic level of investments to strengthen the alliance. “We thank you for your leadership and your continued support on the issues that matter to us most,” he said. “Under your administration and your leadership, the Republic of Korea Armed Forces enjoy historic levels of resourcing, which makes our alliance stronger and prepares us for any potential crisis or future threat.”

His remarks appeared to refer to Washington’s pressure on Seoul to drastically increase its contribution to defense sharing costs next year. In February, the countries signed a one-year agreement on defense costs for 2019, which said Seoul would pay 1.03 trillion won ($888.8 million) for the upkeep of the USFK, 8.2 percent more than what it spent last year.

Seoul paid around 960.2 billion won in 2018, which was known to be about half the total expenses of the USFK.

This year’s agreement took effect last month. Negotiations for the next year’s amount is scheduled to begin in the coming months, and Trump has openly demanded a drastic increase.

Abrams also expressed appreciation for “the strong and productive working relationships we have with members of [Moon’s] cabinet.”

Recently, it was reported in the Korean media that Abrams had told Defense Minister Jeong that the United States wants to change the planned site for the Korea-U.S. Combined Forces Command from the current location in Yongsan, central Seoul, to Camp Humphreys in Pyeongtaek, Gyeonggi. The Defense Ministry later said the matter is being discussed and no conclusion was made.

Meanwhile, the Blue House said Tuesday that Moon had mistakenly said during his opening remark that the North’s provocations included launches of “ballistic” missiles. Presidential spokeswoman Ko Min-jung later corrected that remark, saying Moon meant to say “short-range” missiles, but made a mistake.