GOT7 gets honest about life in the spotlight: The boy band’s latest EP touches on the difficulties of life as a K-pop star

GOT7 gets honest about life in the spotlight: The boy band’s latest EP touches on the difficulties of life as a K-pop star

Twitter co-founders, from left, Biz Stone and Jack Dorsey sit down with GOT7 members BamBam, Youngjae and Mark during their visit to Korea in March to talk about Twitter as a platform for spreading K-pop. [TWITTER]

Boy band GOT7’s new EP “Spinning Top: Between Security & Insecurity” may be one of the most honest K-pop albums released in recent years.

The album, as the title suggests, dives deep into the anxieties that the group’s members regularly face as they continue their careers in the competitive K-pop industry.

During a group interview on Monday ahead of the EP’s release, GOT7 members JB, Mark, Jackson, Jinyoung, Youngjae, BamBam and Yugyeom got serious about their fears.

“As idols, we have our private insecurities,” said Jackson. “A lot of people attend our concerts and we’re really thankful, but we wonder how long this will last. What if people stop coming to see us one day and reporters don’t write as many articles?”

“Our songs in the past have been about love, but in this album’s lead track ‘Eclipse,’ we worry about whether we can keep what we have,” added JB.

On the first three songs of the seven-track album “1 Degree,” “Eclipse” and “The End,” members sing of losing their balance and facing darkness.

The album takes a more positive turn as it progresses, however, and in the next three songs, “TIME OUT,” “Believe” and “PAGE,” members encourage listeners to go forward despite whatever hardships that may come their way. 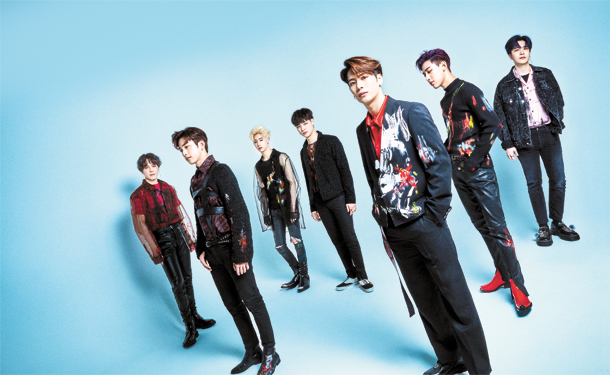 “I wanted to tell people not to be insecure, that it isn’t going to be too late if they took a break,” explained Youngjae, who helped write “TIME OUT.” Youngjae, JB, Jinyoung, BamBam and Yugyeom took part in composing the music and writing the lyrics for many of the songs on “Spinning Top.”

“This album is not about us in stagnation,” JB assured. “I think when there is happiness, uncertainty always follows. This album is about overcoming our insecurities as well.”

Having recently wrapped up a world tour in front of a total 175,000 fans and been nominated for Top Social Artist at the Billboard Music Awards alongside BTS and Ariana Grande, it’s undeniable that GOT7 has a lot going on for them.

In March, Twitter co-founders Jack Dorsey and Biz Stone even singled out GOT7 as the artists they wanted to meet during their visit to Korea, which eventually led to a face-to-face meeting between the singers and the entrepreneurs. They talked about the role of Twitter as a platform for spreading K-pop.

Despite their success abroad, GOT7 members acknowledged there was room for improvement in reaching more Korean fans.

“I’ve never once thought that we were lacking in talent or performance, but I think there’s something to learn from Twice in how popular they are domestically,” said JB.

“I think we are in a vague position where we are well known but not very well known at the same time. We have to work harder to show more to the audience.”

Twice, who is also part of GOT7’s management agency JYP Entertainment, tends to chart higher than the boy group in domestic music platforms.

Since their debut in 2014, the boys have been tirelessly building their entertainment careers at home and abroad, trying out their hand in diverse musical genres and even acting.

In March, JB and Yugyeom formed a subunit called Jus2, performing as a duo to promote their R&B-style album “Focus.” The same month, BamBam, who is Thai, held his first solo fan meeting tour in Thailand.

Jinyoung recently got his first big break when he scored the lead role in tvN’s romantic-thriller series “He Is Psychometric.” He said that his fellow bandmates were very encouraging, bringing him snacks on set and helping him practice kiss scenes.

For the rest of the year, the boys assured their fans that they would be focused on group activities.

Earlier this month, JYP Entertainment unveiled a couple of venues for GOT7’s upcoming “Keep Spinning” world tour, which is set to kick off in June.

Seventeen cities have been disclosed so far, including Los Angeles, London, Berlin and Sydney.

“Only a few venues have been revealed so far,” said BamBam, promising that this world tour will be even bigger than their previous one. GOT7 will work with Live Nation, which has helped produce tours for Paul McCartney, Lady Gaga and many other top global performing acts.

“We are glad to be finally back together for this album after our separate activities,” said Jackson.

“We know that GOT7 needs all seven of its members,” said JB. “We will continue GOT7 together and we’ll not let it go.”