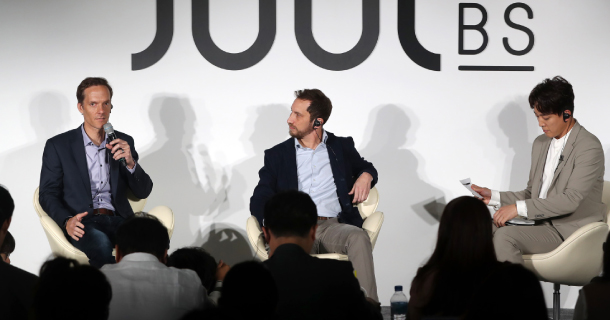 Juul e-cigarettes will go on sale in convenience stores and duty-free shops in Korea tomorrow.

Launched in 2015, the product has enjoyed huge success in the United States and currently sells in nine foreign markets including Canada and Europe. Korea is the first Asian country Juul has launched in.

Sales will kick off at GS25 and 7-Eleven convenience stores as well as Lotte and Shilla duty-free stores, Juul Labs announced on Wednesday. On whether it plans to sell the e-cigarette in CU, which has the largest number of convenience stores in Korea, the company answered that it will continue expanding retail channels.

“We believe that through innovation, combustible cigarettes and the tremendous health care cost can be eliminated by offering better solutions,” said James Monsees, co-founder and chief product officer of Juul Labs, in a press event on Wednesday in Seongsu-dong, eastern Seoul.

“We know that by coming to Korea we need to earn your trust in bringing the product. […] I can’t be more pleased and honored to be launching first here in Korea.”

Juul Labs’ other co-founder Adam Bowen, currently the chief technology officer, said the launch in Asia was significant in that it represents half of the global smoking market.

The two visited Seoul to celebrate the launch. Having been smokers themselves with health concerns, Monsees and Bowen started developing e-cigarettes for their graduation thesis at Stanford University and launched Juul after a decade of research and development. The product is now the best-selling e-cigarette in the United States with more than 70 percent of the market share.

Juul’s Korean version is slightly modified in terms of nicotine and flavor, the company said.

Overseas, Juul is sold with a nicotine content of 5 percent. Korea’s version has less than 1 percent, more specifically, less than 10 milligrams per milliliter. Bowen explained that this fits the local cigarette market, where products are quite low in nicotine content compared to other countries. This is also because of a domestic regulation that sets nicotine content at a maximum 2 percent.

Unlike the heat-not-burn cigarettes popular in Korea that steam cigarette leaves, Juul is closer to liquid e-cigarettes with technology to offer a smoking experience closer to combustible cigarettes.

But contrary to the company’s mission to offer a healthier alternative to traditional cigarettes, Juul is facing criticism in the United States that it has increased the nicotine intake of teenagers drawn to its cool, high-tech image.

Earlier this year, former Food and Drug Safety Minister Ryu Young-jin also addressed the need to come up with measures to regulate Juul before its official release in the country, pinpointing its popularity among U.S. teenagers.

In recognition of such concerns, Juul Labs clearly stated during its press conference that Juul sales will be strictly prohibited to teenagers and that its San Francisco headquarters was experimenting with control systems that can dramatically reduce youth usage.

The company also emphasized that it will not conduct any form of social media marketing, a strategy it used in its early days before it was greatly criticized for attracting underage users.