[REVIEW] Even if it’s panned, Disney sees hope in ‘Aladdin’: Live-action remakes disappoint many, but kill at the box office

[REVIEW] Even if it’s panned, Disney sees hope in ‘Aladdin’: Live-action remakes disappoint many, but kill at the box office 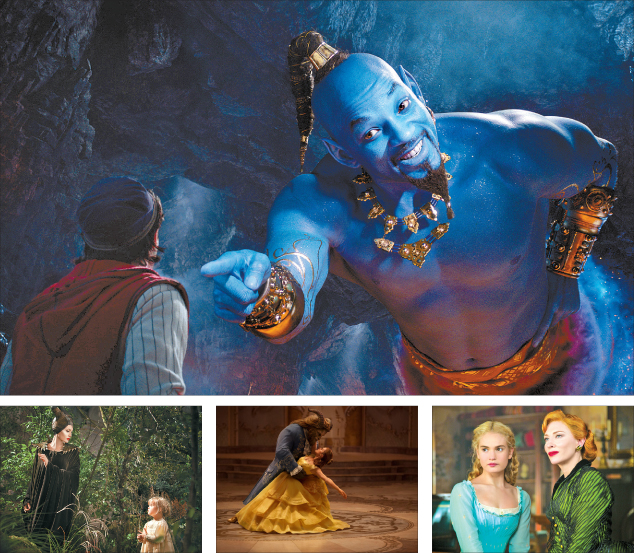 Will Smith, top, plays Genie in the newly-released “Aladdin.” Above, scenes from Disney’s live-action films including “Maleficent,” left, starring Angelina Jolie (left) and Isobelle Molloy. In the middle, Emma Watson and Dan Stevens in “Beauty and the Beast.” At right, Lily James and Cate Blanchett in “Cinderella.” [WALT DISNEY COMPANY KOREA]

Disney’s live-action version of “Aladdin” hits the local box office today, and fans should brace themselves for a serious disappointment. Regardless of how successful it may be at the box office, the film brings up a question that some fans might also have been wondering: Why is Disney continuing to make live-action films when they lack both the originality and quality of its animated features?

Ever since trailers for “Aladdin” were released, Disney fans did not hesitate to voice their concerns about Will Smith’s portrayal of Genie. Questions about his depiction escalated to the point that the actor had to confirm on social media that he is indeed blue throughout the film.

After seeing the film, one might wonder why Disney chose Smith in the first place, especially because he clearly cannot sing. His flat, slow, auto-tuned voice simply does not live up to the jest and liveliness that Robin Williams brought to his portrayal of Genie.

And there’s another difference between the original and the live-action remake that many fans might think feels familiar: Princess Jasmine is not merely a princess in this film. She is also a lover of books and maps, ambitious enough to dream of becoming a sultan one day, although the Agrabah law forbids it.

Disney knows better than anyone that many of their classic animated films, although beloved by many, are outdated in some ways. Handsome princes or strangers rescuing a damsel in distress is no longer appealing. So Disney tweaked the story a bit to add a more modern touch like they did for “Beauty and the Beast,” when they made Belle an aspiring inventor who wants to explore the world someday.

Although fans appreciate the gesture, the new “Aladdin” will come as a surprise for children of the ’90s who grew up with Robin Williams as Genie.

Which leads to the question: Do live-action films really fulfill the fans’ desires to have their favorite characters come to life?

Regardless of the question, from a business standpoint, producing the films does make sense.

“Disney fans cannot resist the temptation,” culture critic Kim Hern-sik stated. “For fans who grew up during the animation renaissance, the live-action films are a must-see and this nostalgia warrants profitability.”

“They are safely relying on familiar content, which basically means lower risk, and an emphasis on their unrivaled originality.”

Disney discovered the possibilities of live-action remakes when they released “Alice in the Wonderland” in 2010. It went on to be an unexpected success, earning the company over $1 billion worldwide. The release was nicely timed, as the world was still wowed by the computer-generated (CG) technology of “Avatar” (2009), and the film made great use of the technology to portray the real-action version of wonderland.

Yet not all live-action films have been successes. “Alice Through the Looking Glass” (2016), the sequel to the box-office smash, only made around $300 million worldwide.

This year’s “Dumbo” faced a similar fate, collecting only $346 million around the world. Although the film had a strong message - shining light on animal abuse and human greed - Tim Burton’s dark setting did not strike a chord with young audiences. The character of Dumbo, who was first introduced through the 1941 film, was also a little too unfamiliar to contemporary audiences.

Although “Aladdin” is a relatively recent film that came out 1992, Disney may have been concerned about the film’s box office success, so they turned to another form of marketing that they could trust.

“Because they were worried, they needed a star. It’s as simple as that,” said Yu Gi-na, a professor in the theater department at Dongguk University, when asked about the casting of Will Smith. “They need some form of assurance that the film will do well, and casting a star to play a part is the best way to guarantee that the film causes a commotion [and] get people talking about the film before its release.”

When studios are stuck, they turn to bankable celebrity talent. Because the actors in the lead roles of Aladdin and Jasmine are relatively unknown, Disney needed to add a big name to the cast list. Other live-action remakes have added A-list stars to their cast, like Emma Watson in “Beauty and the Beast” and Angelina Jolie in “Maleficent.”

But while Watson was criticized for her role and her not-quite-there singing talents, Jolie was widely praised for the role and received many accolades.

Unlike other live-action remakes, which have typically followed the original films pretty closely, “Maleficent,” was a creative take on the 1959 animated film “Sleeping Beauty.” The company took the original tale and showed why Maleficent became evil, giving the original story a modern twist. Another interesting change they made is when Aurora is under Maleficent’s spell, the “true lover’s kiss” that Aurora needs to break the spell comes from Maleficent, who had known and “raised” Aurora, growing to love and truly care for her, rather than Prince Phillip, whom the princess had only met for few minutes. Instead of emphasizing the love between the prince and the princess, Disney focused on the budding relationship between the “evil” fairy and the princess.

It’s obvious that live-action films have a clear selling point. “Disney fans who have grown up with the animated films are now adults with money to spend, and now, they may have families of their own to bring along, connect with the film, and have something to talk about,” said Hwang Jin-mee, a film critic from local film magazine Cine21. “It’s true that Disney is redeeming itself from the stories they told before by updating them with a bit of feminism, trying to depict the story from a different perspective. But they will never be able to surpass the originals because the plot never diverts. We already know the ending of the story, so where’s the fun in that?”

Moreover, the fans’ sentimental investment will always tilt toward the originals, which is something the company can’t make amends for.

“[Disney] is trying to secure as much of their original content as possible mostly due to the rise of Netflix, but I presume they’ve come to a dead end in developing their animated films, which is why they are relying heavily on their successful legacy.” Kim said.

Unfortunately for “Aladdin,” the magic that Genie flamboyantly brings to the animated film simply wasn’t easy to replicate, even with the latest CG technology. But sadly, this version of the film may be the one that the majority of younger audiences will see first, rather than the original animated classic.