North’s envoy to UN says ship must be returned

North’s envoy to UN says ship must be returned 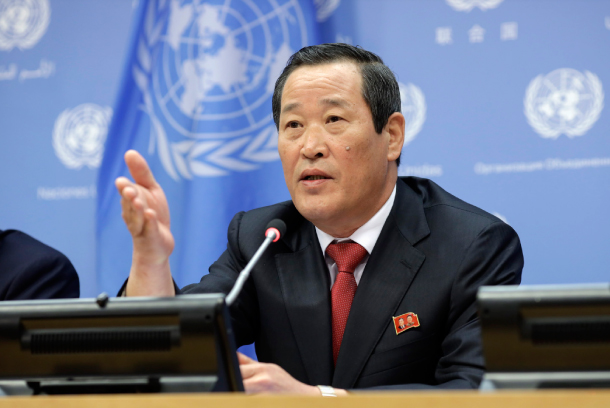 Kim Song, the permanent representative of North Korea to the United Nations, speaks during a press conference at the UN headquarters in New York on Tuesday. [XINHUA/YONHAP]

North Korea’s top envoy to the United Nations (UN) warned that the U.S. seizure of a cargo ship earlier this month could endanger future denuclearization negotiations in a rare news conference in New York on Tuesday.

“The United States should deliberate and think of the consequences that its outrageous act might have on future developments,” Kim Song, the North Korean ambassador to the UN, said at a press conference at the UN headquarters Tuesday. “And also, the United States must return our cargo ship without delay.”

The U.S. Justice Department on May 9 announced it had impounded the 17,061-ton Wise Honest bulk carrier and accused it of exporting North Korean coal in violation of U.S. and UN Security Council sanctions. Along with coal shipments, it was also used to import heavy machinery from Yantai Port in China’s Shandong Province to Nampo Port in North Korea, the Justice Department said.

This was the first U.S. seizure of a North Korean vessel for violating international sanctions. The U.S. announcement came after North Korea fired two short-range missiles earlier that day, five days after launching short-range projectiles into the East Sea.

Kim condemned the U.S. seizure of the North Korean cargo ship as an “unlawful and outrageous act” and accused Washington of infringing international law and the 2004 UN Convention on Jurisdictional Immunities of States and Their Property.

The Wise Honest, one of North Korea’s largest bulk carriers, was apprehended by Indonesian authorities in April 2018.

The vessel is currently in the custody of the United States after it was seized pursuant to a warrant issued in the Southern District of New York.

A ban on North Korean coal exports was imposed through a Security Council resolution in 2017.

The Justice Department said that payments for maintenance, refurbishment and equipment for the ship were made in U.S. dollars through American financial institutions, violating domestic law and Security Council resolutions.

North Korea has been demanding the immediate return of the Wise Honest through its Foreign Ministry and also through a letter written by Ambassador Kim addressed to UN Secretary General Antonio Guterres last week.

During the press conference, Kim took various questions from reporters, including on the status of the stalled denuclearization talks with Washington and U.S. President Donald Trump’s upcoming visit to Seoul for a summit with South Korean President Moon Jae-in.

Kim said that the purpose of the news conference was to clarify his country’s position on the Wise Honest’s seizure while he denounced unilateral sanctions by the United States and its economic pressure campaign on the North.

“This incident is a man-made incident, with intervention of the United States,” Kim told reporters. “My country has neither recognized nor accepts sanctions resolutions of the UN Security Council.”

Kim continued, “We’ll watch sharply every move of the United States with regard to this issue.”

Kim said that “what is clear” is that the latest act by the United States is a “denial of the underlying spirit of the June 12 DPRK-U.S. Joint Statement,” signed by North Korean leader Kim Jong-un and Trump in their first talks in Singapore last year. He referred to the acronym for the North’s official name, the Democratic People’s Republic of Korea.

The second summit in Hanoi, Vietnam, between Kim and Trump collapsed on Feb. 28 after the two sides failed to reach a deal. The two sides wrangled over at what stage sanctions relief came into the denuclearization process.

The U.S. Department of State, however, stressed that international sanctions on North Korea should “remain in place” and be enforced by all UN members, following the ambassador’s demand for the return of the seized ship.

Trump “believes Chairman Kim will fulfill his commitment to denuclearize,” a U.S. State Department spokesperson told the JoongAng Ilbo in a statement Wednesday, adding that the United States “remains open to diplomatic negotiations with North Korea to make further progress on that goal.”

The U.S. Justice Department declined to comment on Wednesday.

Washington has warned that it will crack down on the North’s illegal transshipments of coal in cooperation with other countries maritime authorities.

Stephane Dujarric, a UN spokesman, in a briefing Monday confirmed that Guterres has received North Korea’s letter and is “studying” it, as the matter “relates to the issue of sanctions on the DPRK and actions taken in the implementation of those sanctions.”

But he added that sanctions evasion questions and matters related to countries’ “implementation of Security Council resolutions are a matter for member states to address.”