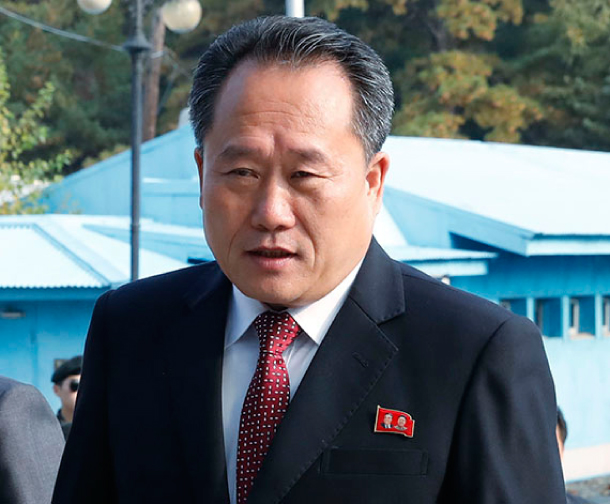 Seoul is reportedly working to verify rumors that Ri Son-gwon was sacked as head of the Committee for the Peaceful Reunification of the Country (CPRC), a leading North Korean organization in charge of South Korean affairs that is roughly equivalent to Seoul’s Unification Ministry.

Ri, best known in the South for delivering an apparently insulting remark to South Korean business chiefs during a luncheon at the third inter-Korean summit in September, also helmed Pyongyang’s delegation for official high-level talks between the two Koreas since January last year.

According to a government official in Seoul on Tuesday, various reports have been received from the North alleging that Ri had been replaced as CPRC head by a man named Lim Yong-chol, a rising figure in the North’s bureaucracy who is reportedly just 49 - quite young, given that the North’s main government positions remain staffed by the old guard.

“If this report is true, then it means the North has replaced all figures from its South Korea-related agencies hailing from the military and linked to Kim Yong-chol, who acted as the de facto leader behind the North Korea-U.S. talks,” the South’s official said.

Kim Yong-chol, who was instrumental in orchestrating North Korean leader Kim Jong-un’s two summits with U.S. President Donald Trump, was recently sacked as head of the North’s United Front Department (UFD) - the country’s leading department in charge of inter-Korean relations and espionage - according to Seoul’s spy agency last month. The fact that he was replaced by a virtual unknown in South Korea, Jang Kum-chol, who is believed to be only 58, was seen by analysts as a sign that Kim Yong-chol was punished for the failure of the second summit between Trump and Kim Jong-un in Hanoi, Vietnam, in February.

Ri is believed to have been one of Kim Yong-chol’s closest allies, owing to their shared background in the military, and was apparently installed as head of the CPRC with Kim’s backing. The CPRC was first established in 1961 as a semi-official organization staffed by both political and civic figures who represent the North’s official face toward reunification issues.

While the UFD is effectively the North’s top body in dealing with matters relating to the South, its practice of espionage made it unsuitable as a diplomatic body, and that role was delegated to the CPRC. After Kim Jong-un’s rise to power, Pyongyang replaced the National Defense Commission with the State Affairs Commission as the highest decision-making entity in the country and elevated the CPRC to a cabinet ministry.

As CPRC chief, Ri headed the country’s delegation to high-level talks as the official counterpart to South Korea’s then-Unification Minister Cho Myoung-gyon. Still, both Ri and Kim Yong-chol’s aggressive character raised questions in the South as to whether they were appropriate partners in forging a harmonious partnership between the two Koreas. In addition to his comment to the South’s business tycoons that mocked their comfortable dispositions in the face of sluggish inter-Korean economic cooperation, Ri also allegedly made several other inappropriate remarks to the South’s delegates.

Another government official in Seoul says Ri’s liberal attitude with his language may have been the cause of his removal amid an atmosphere of self-criticism among the North’s agencies that deal with the South. More likely, however, is that it has to do with a wider crackdown on Kim Yong-chol’s influence in Pyongyang.

Sources, however, attest that the rumors of Ri’s sacking and replacement are far from verified, given that only last month he was appointed as a foreign affairs commission member of the North’s rubber-stamp legislature. One diplomatic source with contacts in the North said that while he had heard rumors about Ri’s removal, other reports say he remains head of the CPRC.