The head of Korea’s Olympic body has been nominated for membership of the International Olympic Committee (IOC), a major boost for Seoul’s efforts to increase its influence in global sports. 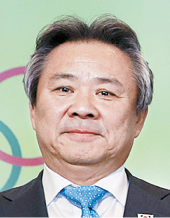 Korean Sport & Olympic Committee (KSOC) President Lee Kee-heung was one of 10 candidates proposed for the election by the IOC’s Executive Board on Wednesday in Lausanne, Switzerland.

The list was submitted to the IOC Session that will meet in June, also in Lausanne. The vote, usually a formality, is scheduled for June 26.

Lee, 64, is in line to become the second Korean member of the IOC, joining Ryu Seung-min, the 2004 Olympic table tennis champion who was elected to the Athletes’ Commission in 2016.

“I was notified by the IOC around 10 p.m. Wednesday, and I had no idea I’d be nominated,” Lee said. “If I am elected, I will work with other sports officials to help raise the profile of our country as a top-10 world sports power.”

Lee said there are a number of pressing sports issues facing Korea in the coming years, including its bid to co-host the 2032 Summer Olympics with Pyongyang and a proposed joint Korean march at the opening ceremony of the 2020 Tokyo Olympics.

The Koreas have also agreed to form joint teams in some sports during the qualifying stages for Tokyo 2020, in hopes that they’d be able to compete together for Olympic medals there.

“Including the joint march and unified Korean teams, I’ll try to do everything possible to contribute to peace,” Lee said.

With Olympic qualifying events fast approaching, though, talks on bringing these teams together have stalled as tensions have resurfaced on the Korean Peninsula following North Korea’s missile launches. Lee said Seoul will be prepared for all possibilities because inter-Korean relations can always turn on a dime.

The IOC said seven of the 10 proposed new members are individual members, and Lee is one of three candidates linked to their function within their national Olympic committee or a continental Olympic association.

The addition of these 10 new members will bring the total number of IOC members to 105.

The IOC added that its Members Election Commission took into account candidates’ expertise in different domains, such as medical, sociological, legal and sports management, in addition to geographic and gender balance.

In all, there are six male and four female candidates. All the proposed members have been vetted by the IOC Ethics Commission, which has conducted integrity checks, the IOC explained.

Lee was Korea’s chef de mission at the 2010 Guangzhou Asian Games and the 2012 London Olympics. He also served as vice president on the organizing committees for both the 2014 Incheon Asian Games and 2018 PyeongChang Winter Olympics, two recent multisport competitions hosted by Korea.

IOC members are elected for eight years, and their mandates can be renewed. The age limit for members is 70, but the IOC may extend that limit for up to four years upon a proposal from the Executive Board.