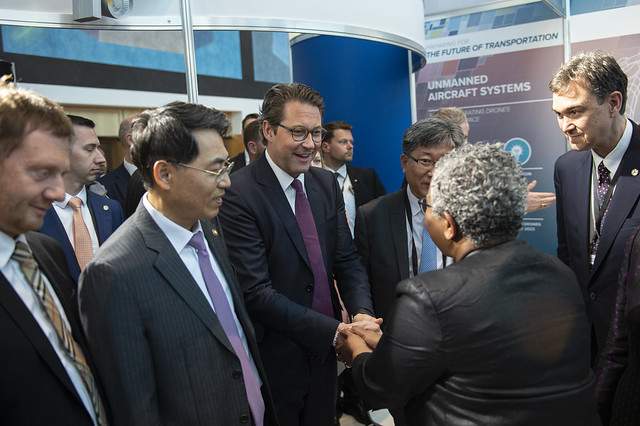 LEIPZIG, Germany - South Korea drummed up hopes for a railroad to North Korea and into Northeast Asia despite recent tensions in inter-Korean relations at an annual gathering of global transport policymakers.

At the International Transport Forum (ITF) held in Leipzig on Wednesday, Vice Minister for Land, Infrastructure and Transport Kim Jeong-ryeol said the railroad project between the two Koreas is key to securing stability and development in the region.

“Through three summits, South and North Korea have agreed to connect rail and roads for peace and co-prosperity,” said Kim, addressing transport policymakers under the forum’s theme this year of “Transport Connectivity for Regional Integration.”

The two Koreas conducted inspections late last year on railways in North Korea after the South Korean government announced plans to connect the country with the rest of Northeast Asia by rail, which has largely been severed since the Korean War more than 60 years ago.

According to a government-backed institute, establishing a connection for one railroad across the peninsula could lead to an economic increase of up to 140 trillion won ($117.7 billion).

While plans for inter-Korean projects have halted after talks between North Korea and the United States stalled after a summit in Vietnam earlier this year, the vice minister stressed the importance of the project.

“From our perspective, this is just a temporary situation and I think that it will be achieved in the end,” said Kim.

The comments came as South Korea holds the presidency for this year’s forum, which has drawn over 1,000 officials, industry experts and policymakers from over 70 countries.

Much of the focus at the annual event that operates under the OECD was directed at policies surrounding changing dynamics in cross-border relations and technological development.

“We need to leave old silos and connect our thinking to solve problems together,” said Kim Young-tae, secretary general of the ITF. “Better physical connections in the 21st century require us to connect policies more effectively.”

The secretary general added that the forum will allow for open discussions between policymakers considering the testing geopolitical issues surrounding the global community.

“We are open minded and very flexible about the issues … especially we are now struggling with uncertainties coming from Brexit, the trade war and the connectivity issue in the Korean Peninsula,” explained the secretary general.

This year’s three-day event, which ends today, covers a range of issues in the transport sector including new developments in transport infrastructure, shared mobility and reducing vehicle emissions in alignment with the 2015 Paris Agreement on climate change.

“Participants agree that there is a need to include all transport modes in the global effort to achieve low emissions and to enhance stronger collaboration across all stakeholders,” read the statement.

“This year’s forum focuses on connectivity … one of the most important technologies is 5G,” said Vice Minister Kim. “In order to use 5G in self-driving technology … Korea has established K-city, a test bed for the system, incorporating the 5G network.”

The report also highlighted the rise of shared mobility in the future.

While the new transport method accounted for only 1.5 percent of worldwide urban travel in 2015, it is expected to be responsible for over 20 percent in 2050.

Along with the broader, rapid growth, the ITF also directed attention at disruptions in the industry such as the reduction of carbon dioxide emissions by 30 percent by 2050 through the increase in shared mobility and growth in e-commerce demand that could raise global freight volumes by up to 11 percent by 2050.

The inter-governmental think tank warned that under current mitigation policies, carbon dioxide emissions from transport could grow by 60 percent by 2050 and recommended more ambitious policies to curb emissions to reach the targets set in the Paris Agreement.